One of the many TAPS activities offered throughout the year is the summer overnight Good Grief Camp-Out for children who have lost a parent or sibling. I was honored to have the opportunity to volunteer at one of these camps last June and would like to share my experience. 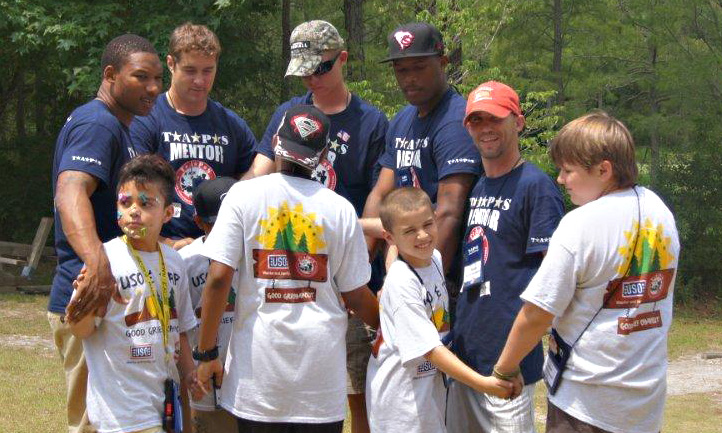 In addition to the tragic death of a loved one, many TAPS children also experience a break with the military lifestyle they have known all their lives. They move away from a military base, which is often the only community many of them have ever known. They lose their friends and also the camaraderie that anyone who has served in the military understands. When these children lose a parent, they also lose the military support structure of their lives.

The Good Grief Camps and Camp-Outs show the children that they can still have a strong connection to the military life they grew up with. The camps also provide an opportunity to talk about their loved ones in a safe place. Their civilian friends don’t really understand the magnitude of the loss. The camp gives them a chance to talk openly about the best things they remember about their loved one, what they miss the most, and what they are feeling—both good and bad.

At camp, one military member (a mentor) is assigned to each child (a mentee). Mentors are active duty, guard, reserve, and retired military members. The mentors spend all their time with the children over the three day camp, having received four hours of orientation prior to the children arriving.

In my camp at Fayetteville, North Carolina, many of the mentors were young Marines from Camp Lejeune and young Soldiers from Fort Bragg. Many of them were veterans of Iraq and Afghanistan and had lost close friends on the battlefield. There were also many other mentors with no combat experience, like myself. Additionally, there were veterans from other conflicts including Vietnam. As part of the orientation, mentors discussed their own grief issues both in their personal life and on the battlefield.

Immediately after orientation, the mentors meet their mentees. I can say without hesitation that I was as nervous about meeting my mentee as anything I have ever done professionally or personally. I kept asking myself, “How can four hours of orientation prepare me to help these kids?” Usually when I meet people having these types of personal problems in the military, I walk them to the Chaplain and get back to my paperwork. This time I was going to stay in the room.

The days are divided into grief sessions and recreational and social events divided by age groups. The grief sessions are not counseling. The mentors are told during orientation that they are not here to counsel the kids or replace a loved one. They are also not here to fix things (often a tough concept for military members in general and men especially). They are there to listen and show the children that they care. The grief sessions are conducted by a trained facilitator with all the mentors and mentees for that age group together. It was during these sessions that I started to understand the enormity of the pain these children are experiencing.

One exercise in particular was pretty powerful for me. One person would stand in the middle and say one thing he would like to do again with his or her lost loved one. If that was something you would also like to do with your lost loved one, then you would get up and move to another chair. Similarly to musical chairs, the person who did not make it back to a chair would stay in the middle and share with the group. When the facilitator first explained the activity, my mentee looked confused and said simply, “I would do anything with my father if I had the chance.” Eventually, the children began to slow down trying to get the free chairs because they wanted to be in the middle and say what they would do with their lost loved one. When the facilitator announced the last round, the mentees all groaned, and the game went on for another 15 minutes even though lunch was the next scheduled event!

In another exercise, the mentees would finish a sentence from a card they would take from the facilitator. One card said “When I see a person in a military uniform, I…” One boy responded that he always feels he can go up and talk to the person no matter where they are. Another girl said that she sees the uniform but doesn’t see the face because she just sees her dad. Those responses really showed the connection the children still feel to the military, even if they have been geographically separated from the military because of their loss.

Recreational and social activities take down the intensity level considerably. There were very few times when we were not throwing a football, shooting baskets, swimming, or playing cards, chess or Jenga. We even threw some horse shoes and played croquet and badminton.

At the end of the camp, I exchanged contact information with my mentee. After all my reservations about mentoring, I sincerely do believe it helps. The kids (and mentors) universally wanted the camp to last longer and also wanted to come back as soon as they could.