Co-conspirators. Confidants. Comrades. Alternately friend and foe. Two apples from the very same tree. Two peas tucked in a single pod. That was us, my brother and me… 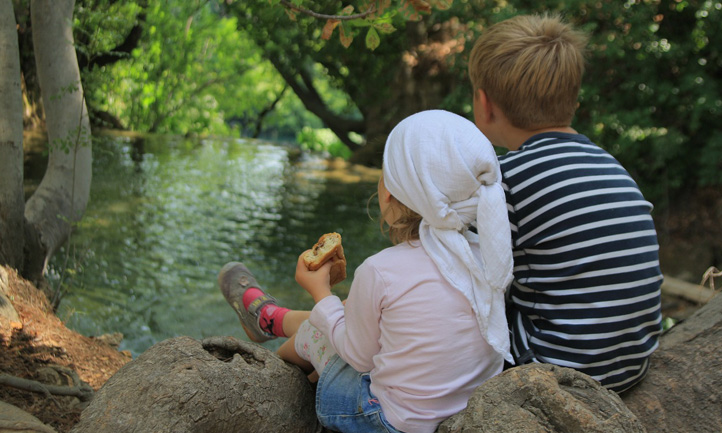 Here’s where I’d like to elaborate on our quiet, idyllic childhood, leisurely painting the words in feathery pastel strokes with a gentle hand. But I can’t. Life at the Hiester house was vibrant and hectic and boisterous and always, always full. Neighborhood kids flocked to our house, the neat little two-story, white-sided home with huge picture windows, shuttered in blue, and the largest yard within five blocks.

In the early years, our wide-open front porch sheltered all the bus stop kids before school and became the official Lego Land each day at 4:00 p.m. By 4:15, we’d all be battle-ready, with forts erected and cannons in place along the perimeter, protecting the flowerbeds and perhaps the neighbor’s cat. Or some days, the cat was unlucky enough to be declared more an enemy than ally.

As embarrassing as it is to admit now, weekends were sometimes spent square dancing in the garage, which had been morphed into a home daycare for mom’s business. We’d invite all the neighbor kids over, shove the toy shelving aside and test our newly-acquired dancing skills with all the bravado only elementary kids are naïve enough to muster. Our music teacher would have been proud.

But we, my brother and I, didn’t always get along. More battles were won and lost over the remote control, ownership of meaningless possessions, and irritating habits than I would care to admit. Just 17 months apart in age, we were too much alike to get along well much of the time and too stubborn to ever just walk away. Sometimes I think I single-handedly prepared him for combat with my inability to cease fire. Oh, if only I had learned to shut up. If only.

I remember one particular vacation, back in the era of wood-paneled station wagons and non-existent seat belt laws, before our sister came along. Our family travelled all the way to Florida and back with the back seat laid flat, luggage and coolers separating the two of us from sight, if not by sound. Nothing but two little rectangular compartments in which to sit and play. Independently. Still, all these years later, we joked that it was one of the best vacation we ever took, simply because we did not fight.

But we also shared many loves and experiences which brought us together, whether we wanted to be or not: a love of peanut butter, identical passions for independence, a single tiny shared bathroom, and an overlapping circle of friends. Despite all our differences, we loved each other with a depth that only siblings can understand or replicate. For a time, we were the best of friends.

Winters found us building snow forts, expertly firing snowballs, fiercely competitive for nothing more than bragging rights. Summers, we’d team up with our friends for kickball or flag football, never keeping score but always competitive. Late afternoons, when the other kids were called home to dinner, we’d take turns keeping watch from the top of the wobbly pine tree at the far side of the property. I don’t know what we were looking for, if anything, but I’m rather certain we never found it. And still, we were mostly content. We didn’t know what the future held, and so we were satisfied with whatever came our way. Or didn’t.

Life was just a journey… a voyage of learning, and we were blessed. Our biggest life lessons, in fact, were discovered right there in that overflowing house in the middle of town. We learned the value of hard work in that abundant garden, the magnitude of love in the arms of a large, extended family, the meaning of friendship inside the wide-open front door, and the sanctity of prayer around our old harvest table.

Friends were family, and family members were friends. Our home was a warm, sunny spot, rich with fertile soil in which to sink our roots.

And thus, we grew, my brother and I. At first a diminutive trunk, growing as one, with willowy and tentative branches. As the years passed, we began reaching, far and wide, in opposite directions, but both reaching for the sky. At times, our roots still firmly planted, we’d find our branches overlapping, interfering, maybe interlocking… perhaps embracing. We grew as one, but individually. Somehow. Another year, another circular ring, another layer of age and wisdom.

Eventually, the sibling rivalry dissipated. A bit, anyway. We grew up without outgrowing one another. We continued searching, each of us on the lookout for which road we’d dare to travel. Michael’s path led him to the military, which really, I think, led him right back to our front porch. If only life could be as easily reconstructed as Legos.

He died a few years back. March 26, 2005, to be more accurate. Killed, to be exact. Kabul, Afghanistan was the place. Far from our childhood home, far from our family, far from his own two-story, white-painted home on Main Street that he shared with his wife and children.

To say I miss him would be an obvious understatement. To say I love him would simply not be enough. He was, and is, my only brother, my frequent confidant, my sometimes friend, my forever hero. He is the one who tormented me because he could, defended me because he wanted to, believed in me because he chose to, and loved me no matter what… simply because he did.

And thus begins the sibling revelry…the celebration of his life. Though I miss the strength of his branches interlaced with mine, the whisper of our leaves when we were in tune with one another, the creak of our limbs when the winds picked up, I stand firm. His roots, entwined with mine, deeply planted and thriving, secure me to this spot. Protected by the fertile soil of our family, memories sprouting up, he supports me still. I choose to remember not how he died, but how he lived. Arms outstretched, reaching heavenward.

His career is summed up in brevity: MSG, E8, KIA. But what I remember most, as his branches sprout anew, are the windows in which I saw who I wanted to be. His blue eyes, blue like those shutters so many years ago. Blue eyes just like mine. Like mine, the sibling. “Just” the sib. The sib left behind.