Whether it’s a regional Good Grief Camp at Fort Hood, an outdoor camp in North Carolina, or the national camp in DC, chances are you have seen the familiar face of one of our favorite Marines and mentors, Sergeant Kris Giuranna. Kris has been a part of the team since 2008 when he first volunteered for the Ohio Regional Survivor Seminar and Good Grief Camp. There he noticed that one of the TAPS banners had one of his fallen battle buddies on it, and from that point on, Kris was hooked. 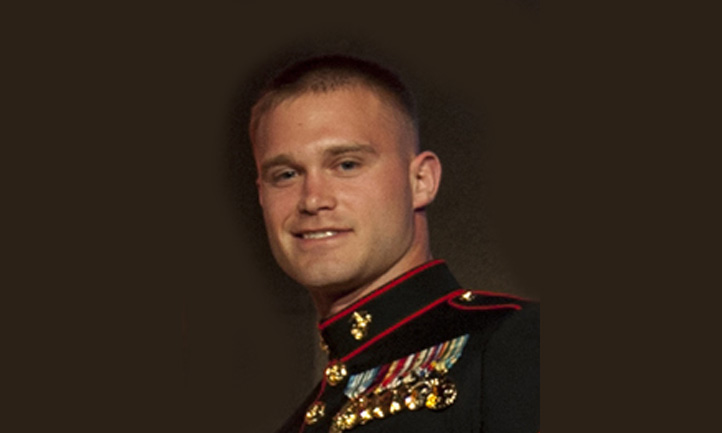 "I saw the banner that had Marines sitting on a truck; one of those Marines was Nick Kirven… Nick was a Marine I really looked up to, and he was killed in Afghanistan in 2005. It was very touching to see his picture on the banner. About a year later," said Kris, "I had the opportunity to meet his parents at a TAPS event and let them know I was with their son in Afghanistan. That was an opportunity I will never forget."

As a decorated Marine with three combat deployments in both Iraq and Afghanistan, Kris opted to work in the DC area to be closer to his own child in Philadelphia. After serving as the Deputy Commander of Tours at the Pentagon, he most recently served in the role of Sergeant of the Guard leading a team of 24 troops at the Marine Corps Barracks in Washington, DC.

One of the most dependable and loyal volunteers and mentors for the Youth Program, Kris has taken his own personal leave time in order to volunteer for TAPS events. He has helped at the last four national Good Grief Camps in DC, more than twenty regional Good Grief Camps across the country, Snowball Express with the TAPS team, the USO/TAPS overnight camps, the annual TAPS Suicide Survivor Seminar, our Honor Guard Galas, The Big Miracle Premiere, and several of our Run and Remember events in the DC area.

Kris helps out in any capacity needed and when he isn’t leading kid’s groups, acting as a human jungle gym, serving as a TAPS security guard, or helping us carry boxes everywhere, you might even find him in the back of the room selling our Baghdad Bracelets.

When asked about volunteering for TAPS, Kris said, “I decided to volunteer because I had always wanted a way to continue giving for my friends that lost their lives; I just wasn't sure how to do it. When my buddy explained to me what TAPS was, I felt as though it was a perfect match for what I wanted to do,” For Kris, volunteering at TAPS is an opportunity to help the families of the many that have made the ultimate sacrifice. It has not only given him a chance to help others, but has also helped him through his own grief and hard times.

"The best part about volunteering with TAPS is being able to help all the families. The services all have their rivalries and claim to be the best, but in the end we all share a common goal and a passion to help people. TAPS is an excellent opportunity to just help, regardless of rank or service."

Kris has proven to be a true leader and role model for all of us, children and adults alike. He is the first to step up and volunteer, no matter the task or the location, and we commend him not only for his years of service to this country but also for his dedication to the families and children of our fallen heroes.