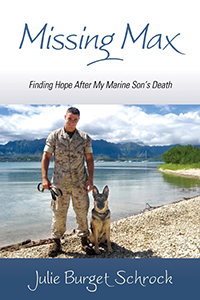 Had I any previous vision of that title, I would have been overcome with fear. And now, knowing that I authored such a book, I’m just overcome.

On August 4, 2010, we received word that our son, Marine Corporal Max Donahue, had been hit by an Improvised Explosive Device (IED). He was serving as a working dog handler in Afghanistan. Max lost both legs and his right arm in the explosion, and two days later he succumbed to his wounds.

The days and months that followed would now be a murky memory had I not started writing down the events. My capacity to mentally retain anything was greatly diminished as I slogged through the days of funeral planning, burial, and aftermath.

At the time of Max’s death I worked as an insurance broker. Since my job required the skill to analyze information and make decisions, I felt I had to pull back from work. Any ability to concentrate or recall data was gone. That’s when the writing began. It gave a sense of purpose to my day; a reason to get out of bed and into the world.

Initially, I wanted to have a record to share with my other son Ryan and his future children. They would never know the powerful presence of their Uncle Max, and writing would be one way to acquaint them with him.

But there was more going on than just wanting to document Max’s story for his future nephews and/or nieces. I began to realize that, even though I was experiencing the heart-wrenching, gut-punching grief that comes with the loss of a child, I was actually getting through those days in a way that was healthier than I would ever have imagined. What was it that was propelling me forward instead of dragging me under?

I started reflecting on the components that contributed to my being what I call “okay-plus.” Okay-plus is a little better than “just okay” which, given the circumstances, I thought was very good! The major factors (in addition to my writing) that allowed me to be okay-plus were my faith, family, and friends. I realize that’s a “trifecta formula” and not everyone has those three resources active in their lives. But what is available to most everyone is the ability to write. No one else is needed for that.

Writing was the outlet that forced me to take the time to collect my thoughts and let the anxiousness and anger flow out of my fingers and onto the page. I had control over what I wrote and how I wrote during a time that was otherwise out of control. The process of writing provided needed relief.

Since I didn’t feel capable of working, the writing gave me something to focus on; something to give meaning to a day that otherwise could have easily been spent crying in bed. It was important for me to get out, be seen, and let people around me know that I was functioning, that I was mourning but still moving. It was important for me to think it as well!

The process of writing was wonderfully isolating. The physical act of documenting a personal story such as mine did not require anyone else’s input or talents. It was just me, my recollection, my computer, and my tears! When the tears started flowing I would just shut the door and let my fingers fly.

Writing also helped alleviate my fear of forgetting events and emotions surrounding those days. By recalling the moments while they were still fresh in my mind, especially knowing how unreliable my memory was, I was able to find comfort in knowing that I had an accurate and reliable record to read and remember. I did not want to forget what took place or the order in which those events occurred.

As I wrote, there were times when I felt more like a bystander to the situations being described instead of one of the main characters. Writing allowed me, in a way, to separate myself from real life and let me focus on this “other mother” and her Marine son. I think it blessed me with brief periods of time when all “this” wasn’t happening to me, it was just part of a story that I was documenting. Unfortunately, this story is non-fiction. Had it been fiction, the ending would have played out very differently!

I’m often asked if the process of writing the book was therapeutic. I don’t think I realized it at the time, but it was much more healing than I knew, especially when I was in the throes of writing it. My mental state was very fragile at the time. Now I look back and can see how the writing gave me something to concentrate on in addition to my grief. It gave me the space to privately pour out my emotions without family and friends being witness to my heart-ache.

Writing also forced me to take the time to confront the reality of all that was happening inside me: what was I feeling, who was I blaming, where could I dump the unfairness of it all? Taking pen to paper or actually pounding it out on the computer made me read thoughts that I might have otherwise buried. Thoughts that, left unattended, could have grown and overwhelmed what was left of my spirit.

And then, there was the moment I now see as a turning point in my grief. It happened when I wrote the words that I wanted Max to read, as if he were the only audience. I wanted him to be as proud of me as I was of him. I wanted him to see that the love I have for him surpassed even his death and that I would live a life that would honor him and not destroy me. That moment came while writing, and I’m grateful for it.

Am I glad I wrote the book? Yes. Would I suggest it to others? Absolutely. You don’t have to take it to the extent of publishing a book, but there are very few exercises that are as available and eye-opening as writing. And anything that helps a person deal with a struggle as personal as grief over a lost loved one is certainly worth a try. 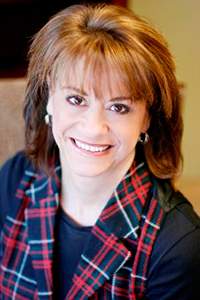 By Julie Schrock, Surviving mom of Corporal Max Donahue: Julie Burget Schrock is the author of Missing Max: Finding Hope After My Marine Son’s Death. She writes of moving through the grieving process and, through her faith and the love of family and friends, beginning the healing process and going forward with her life. To read an excerpt or to order copies of the book go to www.MissingMax2011.com. Julie can be emailed at MissingMax2011@gmail.com.