We've all heard the expression that freedom isn't free. That phrase became all too real to me on December 30, 2005. I got a knock on the door from two uniformed soldiers who spoke to me five simple words that changed my life forever: “We regret to inform you.” My oldest son Tony had been killed the day before by a sniper's bullet while on patrol in Fallujah, Iraq. 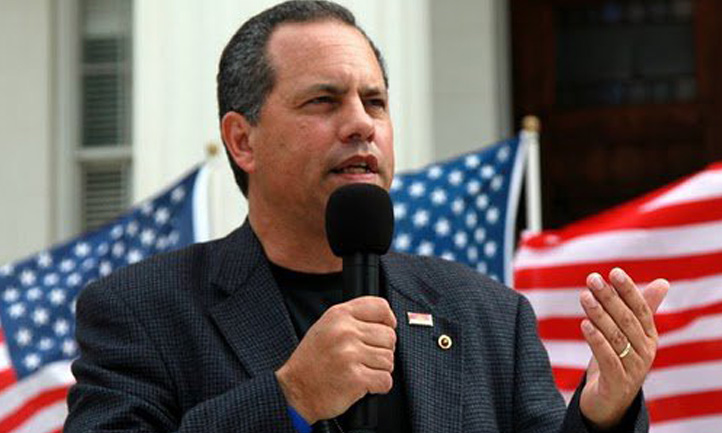 The word “devastation” doesn’t begin to describe the flood of emotion that moment brings to every family who hears those words and experiences the grieving that follows. My first thought when I heard them was that certainly they’ve come to the wrong house. Or maybe he was wounded and they just needed to tell me the details. But reality quickly set in and I knew I was never going to see Tony’s face or hear his voice again. I wondered how I would continue to live. He was my best friend.

As I went through many levels of grief, I embarked on a journey of remembering. It began with a search of my house. Photographs, letters, emails, videotapes… I searched for anything that could take me to a happier time when Tony was alive. Fortunately, I had videotaped his life from when he was a child until he was a teenager, so I plowed through the closets to find and play the tapes. I later found a scrap of paper where he'd written out a grocery list and a couple of letters he'd actually hand written in basic training. Both finds meant the world to me. Of course, that process eventually came to an end because there were only so many drawers and so many closets to search.

Tony was 25 years old, married, and the father of two young children. He had made many friends through his work and social life and after he joined the Army in 2004. I reached out to them for any pictures or stories they might be willing to share. I contacted those he trained, deployed, and served with, hoping to obtain some new nugget of remembrance. Perhaps they could add to my understanding of Tony’s life as a soldier or tell me what happened that awful day.

In time, my journey took me in another direction. I began to think about the fact that Tony gave his life for his country, just like all of the other men and women who died in military service to America. That gave a new perspective to some things I used to take for granted, as many of us do—things such as the freedoms we enjoy every day. Those freedoms truly come at a cost. They have been paid for with the blood of brave young people in conflicts dating back to the American Revolution. And that payment has left a permanent void in the lives of family members who must endure that loss forever.

As the months following Tony’s death crawled by, I found myself searching for ways this country remembered his sacrifice. Of course, there are the many memorials that pay tribute to our fallen heroes in cities and towns throughout the USA. I saw lots of cars with “Support Our Troops” bumper stickers. On Memorial Day, many people took time to contemplate the price of freedom before firing up the backyard grill. And then there is my folded flag that covered his coffin and is now framed in a shadow box in my home.

Frankly, I found myself wrestling with the nagging, exasperating realization that most of our nation will never see those tributes. Then I thought, It isn’t enough! How do we get the attention of the entire country? I didn’t care how self-centered that feeling might seem to others. I felt that the families of the fallen deserved more.

As the war casualties continued to occur, I began attending military funerals in my area. My hope was to bring some measure of comfort to families like mine by reminding them that they weren’t alone in their grief and that families all over America understood the terrible loss they were experiencing. Through various veterans’ organizations, I was able to make contact with families who had lost loved ones from many generations, including the Gulf War, Vietnam, Korea, and even World War II.

As different as these conflicts were, there was a common plea from the family members who lost a son or daughter, father or mother, husband or wife, brother or sister. They had two requests for their fellow countrymen regarding their loved ones: please don’t let their death be in vain and please don’t let them be forgotten. It occurred to me that we needed a symbol that specifically honors and remembers the sacrifices throughout our history that have kept America strong and free.

As a Gold Star parent, I had received many cards and gifts, but I needed to move past my numbness. I needed to do something. I needed to give back. My thought was that public recognition would be a way to get this country to acknowledge and appreciate the sacrifice of our brave men and women and their families every day. I wondered, Why not a flag?

We are a nation that loves flags. In addition to our Stars and Stripes, states and cities have their own flags. Institutions of higher learning have individual flags. Every branch of the military has a flag, as do individual units in the Army and every ship in the Navy. Furthermore, every veteran’s organization has a unique flag or symbol. Yet try as I might to find a specific symbol for those who died for the right to fly all of those others, I found nothing. That realization led me on a new journey to create such an emblem to be flown in gratitude to every family whose loved one has died in military service. 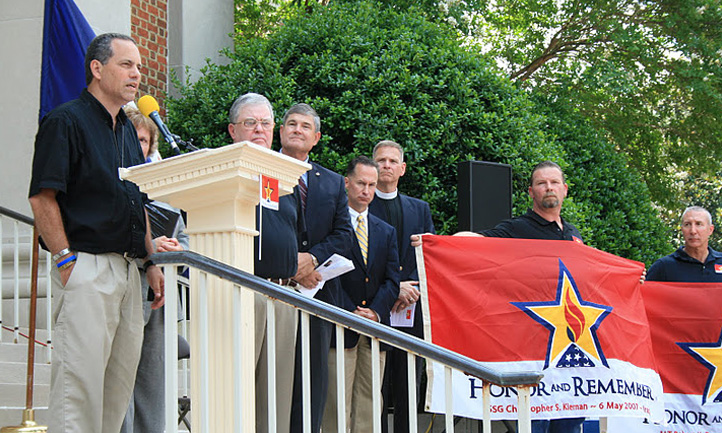 On May 26, 2008, the Honor and Remember Flag was unveiled publicly. It was established to be a national public symbol of remembrance, recognizing all those who died while serving our country in the military or as a result of serving, regardless of the cause of death.

The symbolism represented on the flag is derived from various icons with military and universal significance:

Beyond working to establish the flag as an official symbol in all 50 states, the Honor and Remember organization seeks to present one personalized flag to each family that has lost a loved one while serving or as a result of serving.

The flag, along with pins, shirts, and hats are for sale on the Honor and Remember website. Donations and profits from sales go to furthering the national mission and to pay for the personalized flags presented to surviving families. For more information or to request a flag, visit www.honorandremember.org.