Underwear. Yes, I said underwear. Very few holiday traditions grab your attention as quickly as the mere mention of men’s shiny gold sateen underwear. But before I can impart our newest family secret, I must bring you up to speed with how we arrived at this quirky tradition. 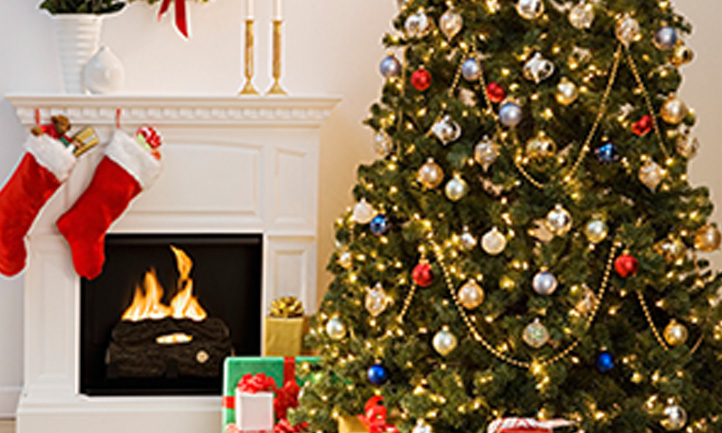 One of my fondest childhood memories of Christmas mornings is the stocking tradition. Every year, it was a race among my sister, my brother, and me to see who could get to sleep first on Christmas Eve. This was quickly followed by a race to see who would awaken first to discover Santa’s loot. I can say with absolute certainty that while I may have won that first race quite often, it was my “little” brother Michael who always won the latter. Just seventeen months younger than me, but five years older than our sister, Michael always loved winning any race, and we girls were no real competition for him.

The rule at our house was that we could open whatever was in our stocking whenever we wanted, but nothing else could be unwrapped until the entire family was gathered together, bleary-eyed parents with coffee in hand and three kids huddled by the heap of gifts. Every year, long before the sun had even considered rising on Christmas morn, it was Michael who would sort and organize the gifts, stacking them by recipient, arranging them just so. And it was Michael who would personally deliver each of our stockings to our bedrooms, where we’d tear through the contents, nestled in the warmth of our own beds.

Eventually, we all married and had kids, and the stockings multiplied. For every new addition to the family, up went another stocking. In fact, it was a new stocking, wrapped in a box, which announced the pending arrival of Michael’s second child.

Every stocking reflects the personality of the family member. Michael’s includes a trumpet in the design for his high-school devotion to the instrument and his adult commitment to the Cavalry. Mine is patchwork plaid in honor of my love for old quilts, Americana, and traditions. No two stockings are alike, just as no two of us are alike.

Over the years our stocking tradition has evolved, and every adult in the family buys an inexpensive stocking stuffer for every other family member, children included. Sometimes the gifts are useful, maybe a snow scraper or some girly lotion. And sometimes they are fun, like a scratch-off lottery ticket or your favorite candy. And then there are times they are just plain useless, like a regifted whatchamacallit you received the year prior from a coworker and have yet to determine its identity.

But one year, my dad and my husband each found something a little more outlandish buried in the toes of their holiday socks: men’s shiny golden sateen bikini underwear, irreverently selected and given by my brother Michael. We all had a good laugh about that, but time passed (as it does) and we all kind of forgot about it.

A few years later, Michael was killed, and none of us really wanted to celebrate anything at all, much less a holiday designed to remind us of all our blessings. The gift I’d been so excited about giving him remained buried in the back of my closet, never to be given. I felt like a traitor for not wrapping it and putting it under the tree that year, as though I was somehow accepting that he wasn’t coming home. Now, seven Christmases later, his gift remains in my closet, a sacred reminder that the best gifts are the people we hold close…even after they’re gone.

That first Christmas was painful and raw. The ache was bone-deep, and even now, it hurts to attempt a brief description. But we soldiered on and did what Michael would have wanted us to do, not necessarily because he would have wanted us to do so, but because we didn’t know what else to do. We had the kids to think about. They didn’t understand that mourning would diminish Santa’s holiday spirit or that it would shatter the sanctity of such a precious day. They needed the safety of those annual traditions we’d built over the years. I didn’t realize at the time how much I needed the comfort of those traditions, too.

So we kept the stocking tradition, and on that first Christmas morning, everyone arrived with fake smiles and watery eyes, gifts in hand. And when we took the stockings down, there was Michael’s stocking still hanging…empty. We went about the business of distributing the others for opening. But I couldn’t enjoy the moment, and my eyes kept going to that lonely stocking there on the mantle, to the little bear blowing that trumpet, and all I could hear was the sadness. Without thinking, I crossed the room and lifted that stocking from its hook and laid it reverently beneath the tree. There was a collective sigh among the adults, and that’s when I understood that all of us were feeling the loneliness.

A few months later, I was cleaning our basement when I came across a box of belongings that should have been pitched long before. As I sorted through the toys and books and clothes, I was appalled that such useless items had taken up residence in my home for so long. But just as I was about to throw it all back in the box, something caught my eye. Could it be? Yes! There at the bottom of that box, was a pair of men’s shiny gold sateen underwear, with the price tag still attached. I laughed out loud and knew immediately what I would do with them.

The following Christmas arrived with a little more pageantry and less trepidation than the one prior, and I couldn’t wait for our annual stocking tradition to commence. When it did, it was my dad who was shocked speechless to find himself regifted with Michael’s prank from all those years before. He didn’t quite know how to react, and neither did anyone else.

Slowly the memory spread throughout the room, and as each remembered the origin of the gift, we all cherished the memory. The atmosphere ignited, and we felt the warmth of Michael’s love and humor and wit.

New traditions emerge, and old ones evolve. The stockings are still hung on the mantle with care, but Michael’s is always there in the middle now, front and center, not further down where it used to hang to the right of mine, in chronological order. And each year, his stocking gets moved to its rightful place beneath the tree, where the trumpet winks at us beneath the twinkling lights. I usually put something in there, to fill the void and as a way of remembering. One year it was a little plastic army guy. One year it was an engraved coin. Who knows, maybe this year it will be the underwear…

I am well aware that gifting skimpy unmentionables that will never be worn ignores all boundaries of decency and common sense, but for our family it has become a joyful part of our family celebration. Every year, I regift that same pair of shiny gold underwear on Christmas morning. And every year, we savor the memories we have of our time with Michael. We’re learning to allow laughter back in, to allow the mirth to meld with the sorrow. It’s the way Michael would have wanted it. Underwear and all.