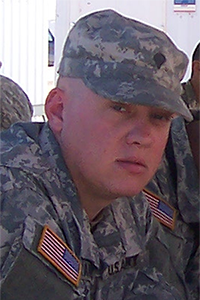 It was a cold, dreary, wet November morning in Oregon. I’d just grabbed a pair of wool socks to ward off the cold when I heard the doorbell ring. I felt a sense of panic. Anyone in our small town who knew us knew that we were usually in church Sunday morning. As I made my way down the hallway, the cold penetrated my soles and a chill coursed through me. An unfamiliar voice asked if I was home. Oddly, my husband, who had answered the door, did not respond. The hallway enveloped me like a tunnel; my pulse pounded. As I turned the corner into our front room, my heart shattered. Two army officers stood in the open doorway.

In shock I tried to convince myself that our son was just hurt, but as I later reported to a local newscaster, “You know, he’s not coming home.” And I wondered how do we go on without him?

I don’t recall much of the first six months after we lost Doug except for that recurring thought, how are we supposed to live without him? How could I, could we, live without him? What purpose could life have without him? Doug was the catalyst in our family. We melded when he was with us. He brought sunshine and happiness, love and laughter, peace and contentment. A natural jokester, he kept the mood light. He completed us.

As is common in the loss of a soldier, Doug’s death was unexpected, untimely, and tragic. While the grieving process is intensely personal and private, a military loss, especially in the early days, can be a public affair. There may be honor paid to your loved one by the military, veteran’s organizations, and community. That very honor can complicate your grieving. It takes courage to mourn publicly in the presence of military officials, the media, family, friends, and the curious.

But it is essential that we mourn.

My expressions of grief have been many and varied, and the coping mechanisms that have emerged are myriad. After five years I can see how various facets of the mourning process brought comfort and peace. Though the following suggestions are not exclusive, they are the ones I found most helpful.

The loved one you’ve lost was a unique individual. There has never been, nor will there ever be, another like him. Remember and cherish him.

I realized that going on without Doug meant no longer seeing his “look.” It is one of contentment, lips slightly parted, blue eyes pools of peace and calm, his expression contemplative. This image of him is captured in my favorite picture sent home from the war. Though his eyelashes were caked with sand and sweat; his ears sunburned, peeling, and raw; his lips dry, cracked, and bleeding he had his look of perfect contentment. I am so grateful for that perfect portrayal of him, a reminder of his character. I have numerous copies of that picture displayed in my home. I study it often, and it always brings a sense of peace and relief.

The relationship we each have with our loved one is unique. Dr. Alan Wolfelt writes in his book Understanding Your Grief, “Embracing the uniqueness of your grief may ultimately give you a profound sense of peace.”

One of the aspects of losing Doug that I grieved the most was the loss of our mother-son talks. I had talked to Doug from birth and had vowed he would laugh every day. We had a close relationship intensified by surviving tough times when he was a toddler and I a single mom. We communicated on a deep level, often without words. A look, a shrug, a sound would convey what words could not. I knew his thoughts; he knew mine. And we had supported one another faithfully throughout the years. I will always cherish our relationship and remember its defining moments.

I have found it comforting to remember not only the content of our conversations, but the context, the deeper meaning. I hold dear the times we shared and words that were spoken.

During Doug’s last leave I spoke with boldness, “You’ve grown up to be a good man and I am so very proud of you.” I needed for him to know that I recognized his maturity, his sense of responsibility; and that I accepted his mission. While I wished he was not in harm’s way, I respected his desire to fulfill his duty with integrity and passion. I sensed in that moment a spirit of relief within him, as if hearing those words were liberating. It was one of those moments that drew us closer.

Now I draw on the closeness of our relationship and somehow I know what he would say in a given situation, what he would do. I feel as though being sensitive to his spirit refines me in ways that bring honor to him. I am inspired to be more like him—more accepting of others, more loving.

Remember your loved one’s character. Its central aspects can become the anchors you hold onto.

From the beginning I have found that remembering Doug’s sense of humor was comforting—a relief, a release. One of my recently found and most priceless treasures is a videotape of Doug’s last Christmas home. I remember the conversations, but had not remembered Doug’s childhood antics replayed for our benefit. He sat at the dining room table holding his fork to his head and wagging it up and down just as he had done as a child. We all laughed then and now.

Doug was known for his commitment, making sure the tanks were ready for action. My husband Jim had consistently reminded our kids, “Always check your work twice.” And though Jim was tough on him, Doug credited Jim with inspiring him to be strong and responsible, helping him to become a man. Doug would certify his tank and then check all the others. His gunner said, “Your tank ain’t right if it’s not DJ certified.” It somehow lessens our sorrow to know that his service was exemplary and we contributed.

Despite my objections Doug volunteered to drive in a ground assault convoy. We’d had the conversation. He expressed his interest; I had adamantly objected. My desperate need was to shelter him, save him for myself. But he chose a higher calling. He felt compelled to provide protection for the convoy.

Just as I was protective of Doug he protected others—his fellow soldiers, friends, and family at home. I’ve had to accept that he was a grown man who made his own decisions. He was, after all, following his nature. He’d always watched over me. Why would he not continue in that venue and watch over others? Being protective was one element of his mission. I will always honor and respect that.

Doug became a man of purpose, mission, and unity, a protector and lover of his fellow man, an encourager. His memory remains alive within each of us. We speak of him often with laughter and tears. We love him now more than ever. We will never be the same without him.

How do we go on without him?

Ultimately, we find comfort in knowing Doug fulfilled his life’s purpose by serving God and country, defending and ensuring safety for his loved ones at home. And I have peace, knowing he willingly gave his life for us, for his country. Doug will forever be my hero—an angel whom God commands—as we go on without him.