One of the things that someone said to me shortly after Matthew died in 2007 was this: “There will be some good days and there will be some bad days. Let the good days come and enjoy them.” I didn't believe it at the time but it turned out to be true. 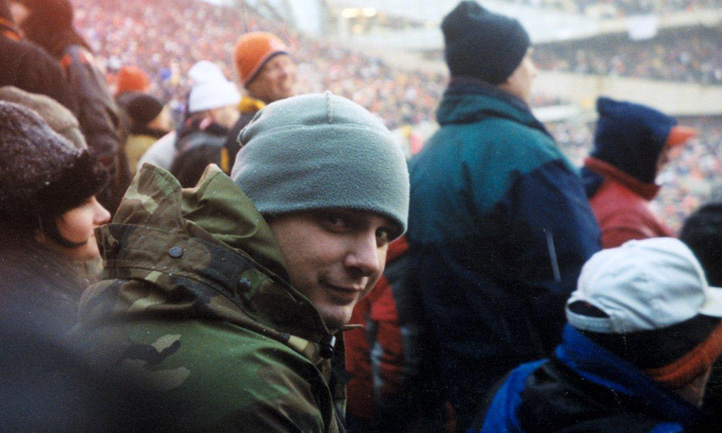 When I first heard these words in the wake of losing my son, I wasn't the most optimistic person on the planet. But lately there have been some changes. To tell you why and how, I need to go back a few years.

When Matthew was eight years old, he tied balloons on his arms to jump off the monkey bars thinking he could fly. I suspected then that my son was an optimist. When he turned 12 and announced he was a New Orleans Saints fan—back in the nineties when they had never been to the playoffs or had a winning record—I strongly suspected that he was an optimist. And when Matt told me in 2005 he was going to Fort Benning to learn how to jump out of airplanes—with no balloons tied to his arms this time—all of my earlier suspicions of his optimism were confirmed!

My favorite picture of Matthew was taken at the NFC championship game in 2007. Matt had just returned from his first tour in Iraq and I got tickets to the game at Soldier Field. That snowy Sunday the Chicago Bears were easily victorious over his New Orleans Saints. The Bears went on the play in the Super Bowl, but on the way to the airport Matt said, “Dad, the Bears were the better team today, but I know someday the Saints will win the Super Bowl.”

Some time later I put him on a plane at Midway Airport. That was the last time I ever saw him alive. He had volunteered to go back to Iraq for a second tour. When he got there he volunteered to drive down a road that few others wanted to drive. He was an optimist all the way, like so many of our soldiers. I guess he had to be, to drive down that road and do what he did. He was killed on May 3, 2007, but the story doesn't end with Matthew's death on that road south of Baghdad.

Although I had poked fun at his allegiance to the New Orleans team, I became a die-hard New Orleans Saints fan in the season of 2009-10. Maybe I jumped on the bandwagon late, along with a lot of other people, but for me it wasn't really the Saints that I was rooting for. Moments after the Saints won over the Vikings in the Super Bowl, I watched as quarterback Drew Brees held his infant son aloft in victory. Balloons were released behind him. I felt Matthew's spirit of optimism at that moment in a way that I never thought possible. I am grateful that Matthew's life and his optimistic spirit touched my life and continues to touch it even today. I am grateful that I know what a good day is now. Sometimes there really are good days. We have to acknowledge them when they do come around, and hope they will come again.

I continue to think about what Matthew would have wanted for us. His legacy was that he embraced all of life, both in solemn duty and unrestrained joy. Given the example he set during his life, he would expect me and those he loved to do the same.