A Growing Component of the TAPS Run and Remember Team

The year was 2004. The TAPS Run and Remember team had been tying up their shoelaces and running to honor their loved ones for the previous four years. For the first time, TAPS expanded the Run and Remember Team to include our TAPS children running the Marine Corps Marathon Healthy Kids Fun Run. 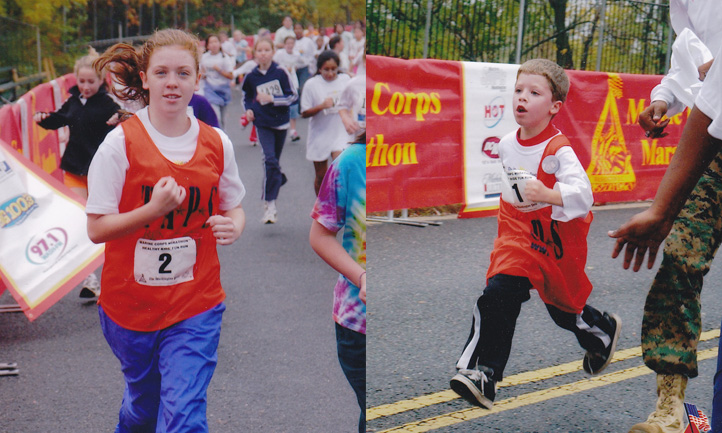 “At that time everyone gathered at the Iwo Jima Memorial, and the children ran two laps around the Memorial. The race was open to 1,000 children. After the run there were healthy snacks available for the children to choose from. My kids loved making their own granola,” said Rosalie Horton, surviving spouse of Major Robert Horton and mom of two of our first Healthy Kids Fun Run participants, Carolyn and Tommy Horton.

Since that first race, the Fun Run has grown enormously, both for the Marine Corps Marathon and for TAPS. In 2010, six waves of children (more than 3,000 total) ran the one-mile course, now located in the North Parking Lot of the Pentagon. The TAPS runners numbered 24.

Each TAPS participant receives a t-shirt with the photo of the fallen hero they are honoring. Prerace warm-ups get the children moving, and the activity area features interactive challenges and games focusing on health and fitness. During the event, Marines run alongside and friends cheer from the sidelines, adding to the excitement and encouraging the runners. At the end of the race, all participants receive a Fun Run t-shirt, medal, and snacks.

Here’s what some of our past runners have said:

Jayden Peterson, surviving son of Captain Justin Peterson, ran the race last year at the age of six. He has been talking about running it again since the race ended last year. “I like going to TAPS to hang out with the other kids who have a fallen soldier. I want other kids to be able to go, too, so I ran to raise money for TAPS. It was cool; I got to wear a shirt with daddy's picture on it!”

Cierra Becker, surviving daughter of Staff Sergeant Shane Becker, has run for the last two years, starting when she was nine years old. “I ran in honor of my daddy. He is my hero. He always played with me and, of course, always loved me. The run is special for me because my dad liked to run. While I ran, I thought about him and all the things he did for me. I know that he would have told me, ‘You know, you did good,’ because he always believed in me. I ran to remind myself just how much he did believe in me and why I should always believe in myself.”

Zak Kazmar is the son of Marine First Sergeant Dustin Kazmar who has run the marathon for TAPS both in Iraq and in Washington, DC. Zak, age 6, ran the Healthy Kids Fun Run last year because his dad was unable to participate from Afghanistan. “I ran to raise money for TAPS and in honor of Brad [Army Specialist Bradley Beard] because he was a good person and so am I. I wish he was here so I could meet him.”

Hannah Sweet, age 10, is the surviving niece of Sergeant Thomas Sweet, II, who died on Thanksgiving Day 2003. “On the day my uncle left for Iraq, I was the last person to get a hug and kiss from him before he was called to attention and marched off with his unit. He is my hero. I run because I don't want people to forget my Uncle TJ, and I like being with the other kids from TAPS.”

Michael Wert ran in 2008 and 2009 following the death of his father, Master Sergeant Michael James Wert, in 2007. “I ran the Healthy Kids Fun run because I like to run, and so did my dad. The run was special to me because I ran it in memory of my dad.”

Brooke Nyren, surviving daughter of Staff Sergeant Nathaniel Nyren, was nine years old when she first joined the team in 2005. “I started running in the Healthy Kids Fun Run to honor my father, my hero. Each run means something special because it was a time for me to honor my dad and because I was running with other kids who were there for the same reason. Two races that meant the most to me were when I ran hand in hand with my closest friends. We knew that together we could get through anything.”

And what of those first two runners?

Carolyn Horton, now 19, continues to run and remember. She has completed the 10K several times and has set a goal to compete in the marathon at some point. Tommy Horton, now 13, has also been running in memory of their dad since 2004. “I run in honor of my dad. The Healthy Kids Fun Run is special because a lot of my friends run, too. When I am running, I think about three things but I think mostly about my dad, and then all the men and women who have died for this great country. The third thing I think about is finishing strong.”