One man’s mission to support TAPS

We live in an amazingly beautiful country, blessed not only by physical beauty, but with a rich cultural diversity. Every state I've run in is a gem of natural splendor, each city a monument to American prosperity, every person a testament to our unique national character. Our country is truly exceptional. And the wisdom I've gained thus far in my travels is that Americans still love their country, and they love one another. It's this love, more than anything else that makes America what it is. ~ George Kraehe 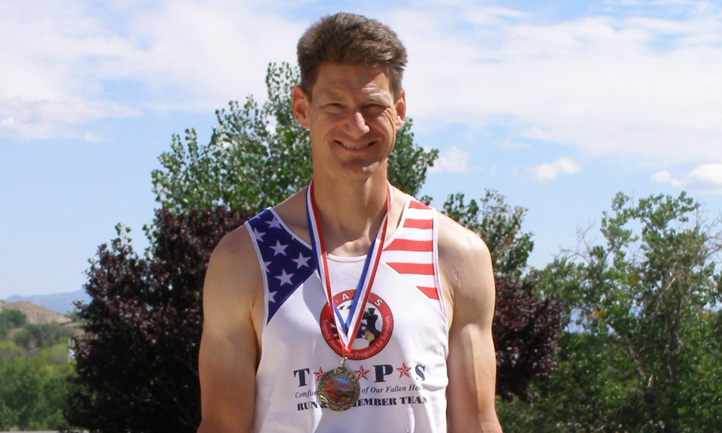 For the last two years George Kraehe has been running all over the place. In fact he has run 14 marathons in 14 states for the TAPS Run and Remember Team. Each time he laces up his shoes for a 26.2 mile race, he runs in memory of a fallen hero from that state. But he’s not ready to hang up his shoes just yet. His goal is to run 50 marathons, one in each of our 50 states.

“During the race, I think about the fallen heroes I'm running for,” said George, “especially when I'm hitting a hard stretch. The thought of their sacrifice and of the loved ones they left behind never fails to inspire me to run harder and to finish the race strong.”

George lives in Albuquerque, New Mexico, with his wife Kelly and his two sons. He’s a lawyer and federal prosecutor with the U.S. Attorney's Office for the District of New Mexico. He is also a major in the New Mexico Army National Guard. As an Army JAG officer, he deployed to Iraq from September 2006 to October 2007 and was stationed in Tikrit, Baghdad, and Mosul.

That’s where he first heard about TAPS. In December 2006, TAPS sponsored the Honolulu Marathon Forward in Iraq, giving deployed service members the opportunity to run in memory of a fallen hero and raise funds for TAPS. George ran in honor of Marine Corps Captain Juan Guzman.

“When I was in Iraq, I didn't as much fear death as I feared leaving my wife and boys without a father and without my love and support. TAPS helps answers these fears by supporting the families our fallen heroes leave behind,” said George. “I wanted to support TAPS by commemorating a fallen hero from each state.” George says he could not do this without the support of his wife and sons. His 12 year old son Benno has started accompanying him to races and ran the quarter marathon in Madison, Wisconsin.

He said, “I've been greatly affected by seeing each of the places our fallen called home and meeting the people in the communities they came from. And I've had the privilege of meeting the families of the fallen. I am always moved by their great faith, strength, and wisdom.”