As the holiday season approaches and our thoughts turn to holiday music, miracles, lights, and angelic hosts, I am reminded of a Thanksgiving night that I experienced many years ago while working at a VA Medical Center (VAMC). It was then that I first heard of an Honorable Celestial Discharge. 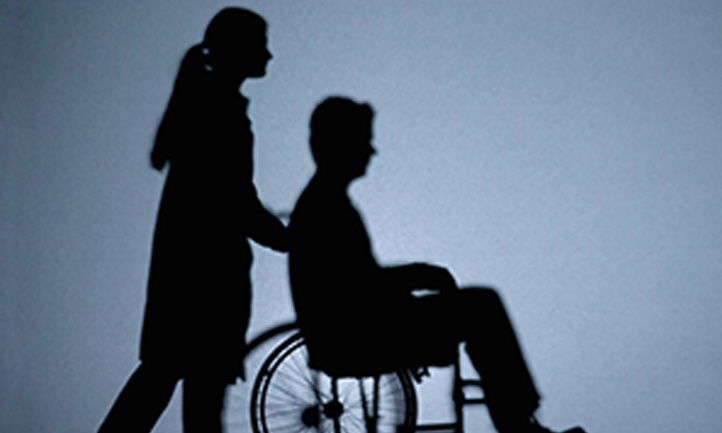 I began my work at a VAMC shortly after my own Honorable Medical Discharge in 1973. I had previous experience working with the critically ill and dying, having worked during my high school years in a local nursing home. Although death was scary to me, I seemed to understand the sacredness of loss. While tending to the dying, I always felt a mixture of awe and sadness in their presence. My job was to hold the hand of the dying, yet it was not hard work to me. It was a sacred privilege instilled in me all of my life.

But on that Thanksgiving night so long ago, I was a new station secretary being trained by a seasoned station secretary. As time and memory would have it, I do not recall this precious lady’s name. We were present while a medical team performed cardio resuscitation on a WWII veteran patient. As station secretaries, we stood by to label all blood tubes for the lab as well as to make phone contacts with appropriate departments for assistance. On that night, sadly, we were not able to revive the veteran. As my senior trainer and I returned to our nurse’s station to begin the paper work, she said to me, “Another Honorable Celestial Discharge.”

I stopped and looked at her, asking what she meant. She smiled and said, “It’s simple; they all get discharged from the military; eventually they all are discharged to the heavens to meet and serve under their Senior Commanding Officer.” She kept the faint smile as she prepared the paperwork, then stopped and winked at me as she said, “Don’t tell the Commander in Chief. He doesn’t like to be outranked.”

I thought about the celestial discharge all the way home. The vast majority of those leaving the service after completing an initial enlistment are separated rather than discharged. The difference is that a discharge completely alleviates the veteran of any unfulfilled military service obligation, whereas a separation (which may be voluntary or involuntary) may leave an additional unfulfilled Military Service Obligation (MSO) to be carried out in the Individual Ready Reserve (IRR). The military discharge, however, is given when a member of the Armed Forces is completely released from their obligation to serve. Having previously served in the military, I was familiar with the five types of military discharges: honorable, general (under honorable conditions), other than honorable, bad conduct, and dishonorable. Each of these denotes the quality of service and discharge conditions under which the service member completed his contract. Clearly the Honorable Celestial Discharge was not listed.

Years later when my son, Navy Seaman Jesse P. Henry died on July 3, 1998, it came back to me and brought a great measure of comfort. His death bothered me terribly, especially considering that neither I nor any of his family were with him at the most critical breath of his life—his last. I agonized over that for many, many years. It helped me to know that my Jesse had experienced the glory of an angelic celestial transfer of duty. While I was at first troubled that Jesse had died without me or family with him, I was comforted in realizing that he had indeed been very well tended to.

After several years, I was drawn back to hospice care, tending to those who, like my son, die while serving away from home and family. I now feel the presence of a room full of Honorable Celestial Discharged veterans gathering to bring another home. As I witness the release of each life, I am awed at the sacredness of another spirit joining comrades known and unknown, gathered to escort another to their final discharge.

As I work with those who are dying and as I hear on the news of each military death, I am reminded of the time I spent with my senior trainer on that night long ago. And so, for the purpose of this article, I would like to add a new discharge to our vocabulary under the Military Type of Discharge: the Honorable Celestial Discharge. This discharge would be appropriate for any veteran or active-duty service member who dies either while serving in active duty or as a veteran. This would apply to a large number of men and women in America, since 25% of all Americans dying in 2009 were veterans.

The military has many terms to differentiate the way someone is separated from military service, but whatever our belief about the hereafter, the Honorable Celestial Discharge sounds very comforting and regal to me. It brings consolation to me to picture what that must be like; no pain, no disease, no evil, and no darkness. I picture all the veterans in heaven lining both sides of the heavenly pathway, as they welcome each new Honorable Celestial Discharge… much as the members of the Patriot Guard line the walkways during earthly funerals. I wonder if, once in heaven, they are assisting the angels in preparing for some ultimate, cataclysmic battle. Do they serve their Omnipotent Commander in a military capacity? If we are to believe in the approaching hoofbeats of the Apocalypse, is it possible that they will ride on the great steeds of heaven to earth to reclaim us?

Or are they fishing?

By Colleen Betlach, surviving mom of Navy Seaman Jesse P. Henry: Colleen Betlach is the surviving mom of Jesse Henry and founder of Beyond the Folded Flag (www.beyondthefoldedflag.com), a long-term grief counseling and bereavement education program for surviving family members of military, contractor, or terrorist-related casualties. Colleen is a TAPS peer mentor and Care Group facilitator and continues to volunteer part time at a Florida VAMC serving the Chaplain Services on the Hospice Unit. She notes that her personal motto that people shouldn’t die alone parallels the Soldier’s Creed which states, “I will never leave a fallen comrade.”