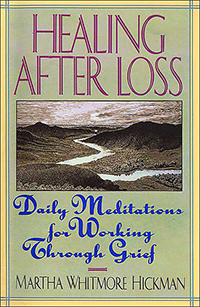 Daily Meditations for Working Through Grief

We all know that our grief doesn’t evaporate after a few days and weeks, even though some of our friendships do. This book was my constant and faithful companion during the first and second years of grieving. I liked it so much I bought copies for several friends who were also grieving.

Healing After Loss is divided into 365 daily readings. Each reading starts with a short quotation followed by several paragraphs exploring the topic. At the end of each reading is a thought to carry us forward for the day. The quotations range from Sophocles to Shakespeare to Sinatra. Or they could be a stanza of a poem or a verse from the Bible. One of my favorites was written by Dag Hammarskjold: “Life only demands from you the strength you possess. Only one feat is possible—not to have run away.” After the intervening paragraphs, the author stated the thought for the day as: “I will not further burden myself by trying to fit some image of a ‘model griever.’ The strength I have is the strength to be myself.”

Martha Whitmore Hickman is no stranger to grief, having lost her 16 year old daughter to an equestrian accident while on a family vacation. Her daily reflections of the pain of losing a loved one validated my feelings without rushing me to be “over it.” They also brought hope because I knew I was sharing the path with someone who had already walked down it herself.

Although I read the book sequentially, there is no reason it cannot be read randomly. Each page is helpful in dealing with some aspect of grief. It is also meaningful to anyone who has lost a loved one regardless of the relationship or manner of death.

By Betsy Beard: Betsy Beard served as the editor of TAPS Magazine for seven years in addition to volunteering as a peer mentor, care group facilitator, and national workshop presenter. She currently serves as the vice president of Military Writers Society of America and edits their annual anthology. In addition to contributing many articles for TAPS Magazine, Betsy has been published in Living with Loss and various newspapers. She wrote the award-winning children's book, Klinger: A Story of Honor and Hope, which earned three gold medals and a silver medal. She lives in North Carolina with her husband, Randy.