Walking in the Footsteps of Others

If you have not connected with others, register for a TAPS Regional Seminar or request a Peer Mentor.

Now that I am a year and a half beyond the death of my fiancé, I am able to hold my footing a bit longer these days and look back. I look back at this journey so far and I can’t believe this is the life I’ve lived. On an early September morning I was greeted by the men in uniform we so dread seeing when our loved ones are deployed. In a daze I wandered onto the porch as I heard them talking about my address, looking for my apartment unit. I leaned over and said, “You’re looking for me.” 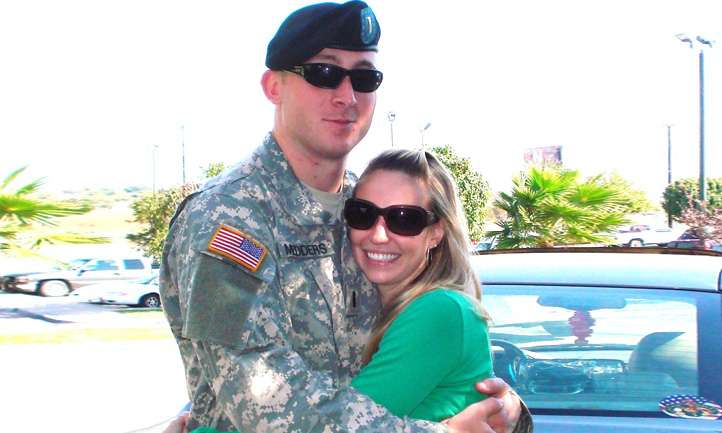 They walked up the steps and everything proceeded as if I were acting it out in a movie. I remember it happening exactly how I would have staged it if I were going to film this situation, except THIS was real. My fiancé, Captain Michael Medders had been killed in Iraq. That is the moment my brain lost itself. From that moment forward I wouldn’t be the same person.

My heart fell to the floor, and my memory of the next days, weeks, and months is spotty at best. I was swallowed by the grief of losing my fiancé, my best friend, our future, everything in one moment. I didn’t think there would be any way I could continue on in the coming days. I thought at first I was still here to make sure everything was done correctly to lay him to rest as he deserved. I could take on that task; I could make sure that everything was done properly for him. Of course, he would have done the same for me. Then my thoughts told me it wouldn’t be long, but every day I kept waking up. I would say to him, “What else baby? What else do I need to do?”

Recently hearing about another woman who had lost her love while deployed caused me to think of where she was in this journey. He had died two weeks before. This triggered a string of difficult days for me. I was consumed with thinking about how she must be feeling and remembering how I was feeling. The hopelessness, the questions, the need to speak with my love filled my mind.

I searched, when I was able to comprehend what I was finding, for someone who had felt the same loss. It was a slow search because it was difficult for me to hear other people’s stories. My wound was still so fresh, it was like taking off the bandage and realizing it was still bleeding… I’d put it right back on. There were days I just could not get on the computer because I was overwhelmed with the emails from my friends, his friends, and friends of friends.

Slowly I was able to inch myself into other military survivor’s stories. A friend passed on information about The American Widow Project. Again, inch by inch, I browsed the web page and slowly made contact. I reached out to see if people felt the way I did. Was I really going crazy? I was sure I was. The pain made me feel a dark side that I never knew existed. I was so sad and so angry. I needed to know which way I should be headed on this dark, weed-covered path.

TAPS Magazine helped provide support for me and I strongly identified with several articles. By reading others’ stories I began to see the footsteps of those who had walked ahead of me. I saw people nearby in this journey and people farther ahead as well as behind.

In my travels I met a widow whose love was killed exactly a month after Mike and she was my sacred friend for a long, long time, the only one I would reach out to on those horrible days. We’d talk about our stories; we’d go over our long, tear-filled days, or our short hopeless minutes. We kept each other walking forward, dragging each other at times. Thank God I found her. From the intense bond we formed I began to reach out and see if I could be part of this new crowd.

I met others who filled me with a sense of belonging, even in the moments I had never felt more alone. They completely understood. They were patient and understanding, and taught me about myself and how to find the strength I needed to get to the next day. Just hold on. Just keep going. That’s all the advice I could take to heart. I remember one of my new friends talking to me on the phone about dating again. She shared how she was feeling and said, “I know you’re sitting there thinking that you will never be in that place. I know because I was there too. Just keep going and you’ll end up wherever you should be.”

I made it through 2009, the year that was supposed to be filled with Mike’s homecoming, bridal showers, bachelor and bachelorette parties, Mike’s final days in the Army, his impending civilian job search, our wedding, our honeymoon, all our anniversaries, both of our birthdays, and all the holidays we expected to celebrate together. These were the days we had already planned in detail. I made it through the days that we had vividly imagined happening.

It was more difficult than I would have guessed in those early days but at the coming of 2010 I felt a release. Once I allowed myself to think about what lay ahead, I realized I felt slightly freer. There were no expectations for 2010. I literally hadn’t even thought about it until the last week of 2009. It was a big step and I could feel Mike saying to me, “It’s okay babe, keep going! I’m so proud of you.”

Feeling stronger, I started to adopt Mike’s way of thinking, seizing every opportunity I could, and doing the things that made me happy. I began trying things that took me out of my element. Mike lived life with such ferocity— enjoying each moment. His energy calmed my worry-filled mind and he taught me how to live a full life. That is the gift he gave me, among countless other things.

I will live life to the fullest. I will. And I am constantly amazed at how often I uncover things that he promised to help me understand. To me it’s as if I am taking this path because of the part he played in my life. He took me this way, and now even though it’s not the way we thought it would be, he’s still guiding me to those things he was so sure of. He’s helping me understand how to be happy again. I’m meeting people and doing things my old bubble-dwelling self would never have dreamt of.

If you are new to the path of grief, all I can tell you is to just hold on. Just keep going. This journey is all your own but there are others who have walked the path ahead of you, and there will be more behind you. They will use your steps for guidance, so don’t feel guilty using the footsteps of those you see in front of you. Your path won’t be exactly like mine or anyone else’s. There isn’t a right or wrong way to do this. There is only what you can do each day. It’s okay to have bad days. It’s also okay to have good days. Be gentle with yourself. Your journey is completely valid and you have others to remind you when you forget.