The TAPS Run and Remember Team fields most of its runners every autumn in the annual Army 10 Miler and Marine Corps Marathon events in Washington, DC. But those aren’t our only venues. Any runner can participate in any event in any location. This year, we are proud to acknowledge two runners who supported TAPS in the prestigious Boston Marathon! 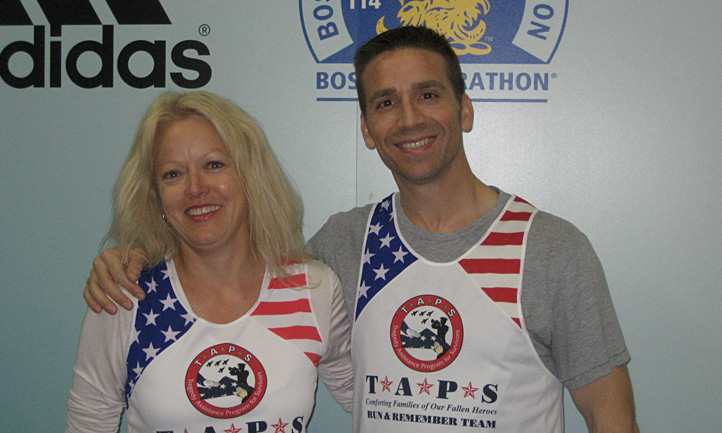 Andre Karr was first introduced to TAPS when he was accepted into the Air Force Honor Guard at Bolling Air Force Base in Washington, DC. He volunteered as a TAPS Mentor and Team Leader at the National Military Survivor Seminar and Good Grief Camp for young survivors for his three year tour. Although he has since retired from active duty, he continues to support TAPS in any way he can, and one of those ways is running for the TAPS Run and Remember Team.

Andre always said that he had no interest in running a marathon unless he had a chance to qualify for Boston on his first shot. His plan was to qualify and run it, just to say he was able to do it once in his lifetime. He had no plans on running another marathon… ever. But then he found a way to add meaning and purpose. He wanted to run for the kids of TAPS, promote the organization, and in his words, “raise funds for all the wonderful things that TAPS does for our fallen heroes' families.”

Heidi Anderson is an active member of the TAPS Run and Remember Team. Residing in the DC area, she is the Director of Environmental Policy at SAIC (one of TAPS’ major sponsors). Near the end of 2005, Heidi and a friend decided to run a marathon in the next year. They signed up for the Marine Corps Marathon; then searched for a military-focused charity. They found TAPS.

Heidi said, “I knew that I really needed a reason to train and run such a great distance, and I was so very touched by the great work that TAPS was doing for the families of our fallen heroes. My husband served 23 years in the Marine Corps, and I have always been a big military supporter.”

Heidi proceeded to become more involved with TAPS, running for fallen heroes in 2006, 2007, and 2008. In addition she has found fulfillment serving as a member of the TAPS Board of Directors. Due to several stress fractures she had to defer the Boston twice until finally, her last opportunity was this past April. “It was an amazing experience,” said Heidi. “It was truly an honor to run in memory of our fallen heroes.”

Written by Andre in April 2010 to the supporters who contributed to TAPS:

First and foremost, I truly appreciate your support for TAPS. It has been a moving experience to see the outpouring of support for such a fantastic cause. Thanks to you, I was able to meet my donation goal. You are all true patriots and are the reason this is such an awesome nation!

In the week before toeing the line for the Boston Marathon start, I was contacted by TAPS Run and Remember Team Director, Marie Campbell, and received some very exciting news. Heidi Anderson, a member of the TAPS Board of Directors, was going to join me as the first to represent TAPS while running the Boston Marathon!

Heidi and I met at the Boston Marathon Expo the Saturday before the race. We were able to take pictures, grab a bite, and talk about our reasons for running. I was running in honor of Staff Sergeant Brian Hobbs, the father of my first Good Grief Camp mentee. Heidi's was a story of Major John Ruocco's life and death: A similar, yet different story.

As Heidi was telling me about Major Ruocco, it reminded me that our troops fight on two fronts: One consumed by destruction caused by bullets, mortars, RPGs, and IEDs...and one that is not as easily defined. A front with no geographical boundaries. A place where we become our own worst enemy. Major John Ruocco took his own life three months following his return from Iraq.

We had beautiful weather for the start of the race. I clocked a respectable, yet conservative hour and thirty nine minutes at the one-half marathon line. Then, well...let's just say that the Newton hills and the change in wind direction made it very apparent that no land-speed records would be broken by me!

I focused on spreading the TAPS message my last half of the race by stopping to chat with large crowds on the sidelines. More than 500,000 people lined the course that day. It was an amazing experience to see the looks on their faces as I explained the TAPS mission. I made a lot of friends that day.

On Memorial Day weekend, I will be volunteering for my fourth year as a TAPS senior team mentor with the teen group during the TAPS National Good Grief Camp. I look forward to putting my arms around the shoulders of these young survivors and telling them about the support you have provided. They will know that they are not forgotten...that their loss rests in the hearts of many people...many true Americans.

Thanks again to all of you. Thanks again for the incredible support and amazing encouragement. You will always have a place in my heart.