Honoring our loved ones with “Taps”

For more information visit www.buglesacrossamerica.org. If you are a brass player, you might consider joining us in our mission to bring live Taps to all veterans. We are always looking for more members so that we can honor more veterans. BAA has more than 5,000 buglers available across the nation. There are even members in Germany, Australia, and other countries—all sounding Taps for our American veterans around the world. 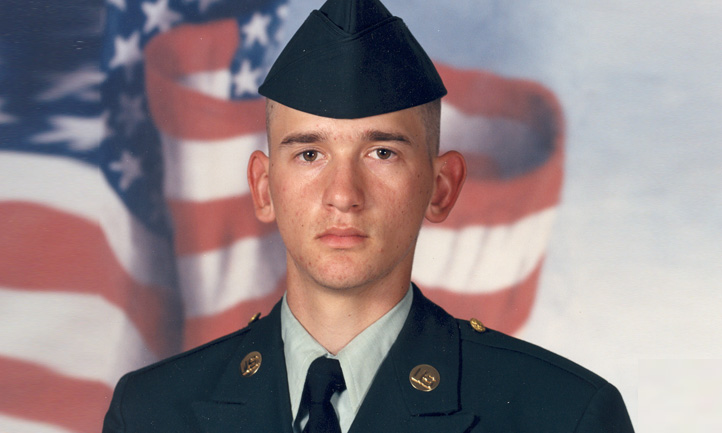 The rifle shots ring through the cemetery. The leader of the Military Funeral Honors team gives the command: PRESENT ARMS! You hear the first few notes of Taps and a chill runs down your spine. The bugler continues sounding Taps and you start to get teary-eyed. As the bugler completes the 24 notes, your throat tightens. Within a minute the bugler has completed the sounding, and the mournful sound drifts away on the air. You sit there, drained, remembering your fallen hero. You thought that you had yourself under control, and then Taps was sounded…the final send-off for an honored veteran.

It matters not whether a veteran died on the field of battle, or living comfortably at home in old age, or even if they died stateside while on active duty as my 19-year-old son, Army Private Michael R. Meyer, did. They all deserve a proper send-off including, if possible, a live sounding of Taps. Like my son Mike, all veterans, at some point in their lives, made the decision to fight for our rights, to fight so that others could live their lives in freedom.

Mike had dreamed of being in the Army since he was in the fifth grade. He enlisted while finishing up his senior year of high school and became a Combat Engineer with the 10th Mountain Division. Mike had aspirations of becoming a Sapper, of going Airborne or possibly even Air Assault. But he never got the chance to do any of that. He died in a traffic accident in upstate New York, just two weeks short of deploying to Afghanistan.

Many people, while dealing with their grief, take up new opportunities to give back to their communities in a variety of ways. After Mike died, I decided that I needed to do something to honor his willingness to put his life on the line. If he was willing to make the ultimate sacrifice, then the least I could do was put one of my talents to work to benefit others.

A year after Mike died, I learned about Bugles Across America (BAA), a nonprofit organization that provides live buglers for veterans’ funerals in recognition of the service these veterans have provided their country. BAA was sponsoring an event they called Echo Taps in Elmira, New York. After some reflection I decided that I needed to make the long trip up from Oklahoma. I have never regretted having done so.

There were 674 of us who participated, including civilians and military personnel, elementary school children, and WWII veterans. We spread out along 42 miles of highway between two national cemeteries. People came out of their homes to listen as Taps rolled from one player to the next. The Echo Taps was followed by all of the horn players sounding Taps at the same time on the grounds of a VA hospital.

After seeing how such an event could impact so many people, I knew that I had made the right decision. If it meant giving up some free time or making trips to different places, then so be it. My son was worth it and so were all of the other veterans. Making that decision was tough; following up on it was tougher. It was hard to convince myself that I was good enough to provide a proper send-off. With the support of my family, I made the decision to become a bugler.

To accomplish my goal I had to learn a new instrument. At the time of the Elmira Echo Taps I had played a baritone horn (which sounds like a trombone) for more than 35 years. That was fine for things like the Echo Taps event, but it would never do for funerals or formal memorial settings. I had to take up the trumpet. After a year of adjusting to playing a smaller mouth piece and building up the courage to sound Taps in front of people mourning the loss of a loved one, I finally joined BAA.

Playing Taps is easy. Sounding Taps is tough. When you play it in your home, with no audience and no ceremony occurring, there is nothing to it. However, once you are standing graveside, waiting for the rifle volley, your throat starts to constrict and your heart starts to race. Even if you did not know the fallen hero, you get caught up in the emotions, knowing that here was someone willing to lay their life on the line for their fellow Americans and even for non-Americans around the world. You start to worry about messing up and ruining the final send-off of a military veteran. Tough? You bet!

Taps, in most buglers’ view, is the 24 toughest notes there are. Now, I know that the musicians out there may be thinking, “What is so hard about Taps? It is a simple tune with just a few select notes. You don’t even have to change which valves are depressed as you progress through it. Any fifth grade brass player can play it.” I agree that this is all true. But I did not say the hardest notes; I said the toughest.

In addition to having to get it right the first time when sounding Taps, there is the added issue of having to get through those notes with the proper amount of honor and dignity. Having the support of other people who had made the same decision to sound Taps for our veterans was very helpful in learning the right way to do things.

While I may have played a rough note or two along the way, I truly believe that is preferable to having an electronic device play Taps. At least I, a living and breathing human, can add feeling to my sounding, and my batteries will not run out in the middle of Taps. There are thousands of us who willingly take on that honorable task on a volunteer basis.

The next time you hear Taps, stop and think about the bugler. Imagine how tough it is to be feeling those same emotions that those attending the funeral are experiencing, while still having to do your best to give a proper sounding of Taps. With a constricted throat the bugler gets less air flow, making it harder to hit the notes properly and sustain them for the right length of time. Once the funeral is over, the bugler walks quietly away, generally unnoticed, often ignored, but never forgotten; and that is fine. It was his intent to render final honors for the veteran, not to gain recognition. Many of us look on our service as sounding the approach of the veteran to the Pearly Gates.

I have participated in local events, national events, and even worldwide events. I have sounded Taps for specific individuals and also for all veterans. Every time I sound Taps, the memory of my son is there, helping me through it.

By Roger Meyer, surviving father of Army Private Michael Meyer: Roger Meyer is the father of deceased Army Combat Engineer Michael R. Meyer (1984 – 2003). In addition to sounding Taps as a ministry to people who have lost a loved one, Roger has written a book entitled Fighting Grief with F-Cubed—Faith, Family, and Friends (Tate Publishing 2007). In his book, he provides many ways to help defeat grief based on his own battle following the loss of his son.
Related Articles: