"To live in the hearts of those you leave behind is never to die." ~ Robert Orr

Every day, when I get to work and flip the switch on my computer, I come face to face with the image of Private First Class Cody Grater, posing under the famous Hands of Victory crossed swords monument in Baghdad. He’s replete in full army gear, holding his rifle, finger poised on the trigger. Cody died on July 29, 2007 when his guard position was struck by a rocket-propelled grenade. But in the image that greets me every morning, Cody is very much alive, looking at me as I start my work day, almost challenging me as he stands beneath the huge archway that Saddam Hussein had fabricated to commemorate his army’s victory over Iran. 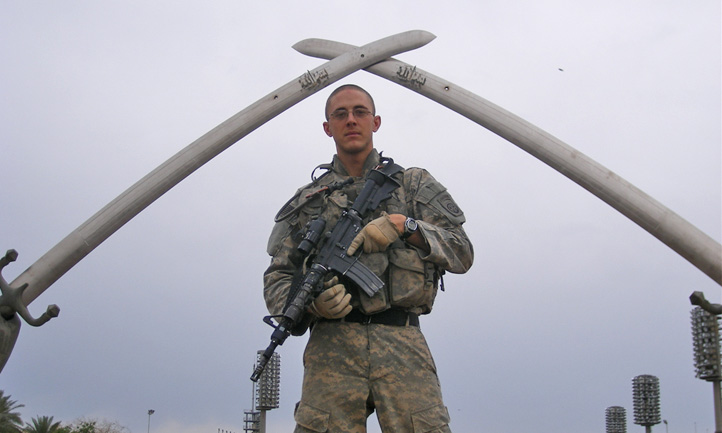 It’s been nearly three years now, and those with good intentions have said it’s time to move on with our lives. “Isn’t it time you changed the background on your computer?” someone passing my desk might say. But the wounds won’t ever go away and Cody is hard to let go of. I want to continue to honor him, even in this small way. I’m trying to find some meaning in this tragic loss. For someone like me who believes there are no coincidences, that everything happens for a reason, it’s hard for me to understand why my nephew was taken from us, with all his songs still in him, with so much still to offer the world.

We who have lost a loved one can take some solace in songs like Jo Dee Messina’s “Heaven Was Needing a Hero,” knowing that our heroes are at peace. The song “Arlington” by Trace Adkins always makes me well up. Yes, we can find some comfort in music, in friends, and in God. And we may even question: If you’re such a loving God, why would you take Cody from us? It’s human nature that we should have so many questions when something so tragic happens to us.

God gives us a lot, and one thing he gives us is free will and the opportunity to make choices. He gave Cody free will, as he gave it to the person who took his life. Cody used his free will to make something of himself; he wanted to help and make a difference. He was on a clear path to success. I’m proud to say that he passed away doing what he wanted to do. Cody put himself in that situation. Rather than question God about his death, I prefer to ask: How many lives were saved because Cody fought valiantly and lost his?

A wise man once said, “All of us are busy doing only two things in this life. We’re either teaching or we’re learning.” As I try to find some meaning in the loss my family feels, I want to reflect on what I learned from Cody. Maybe these words can help others.

Cody’s decision to join the military taught me that we can choose to take control of our lives and make something of ourselves. I remember when we first got Cody’s official military photo. I felt pride. I also remember saying to myself— he sure seems grown up. I didn’t know he had it in him. It didn’t even seem like it was him—he looked so serious. That’s not the goofy Cody I knew! I felt a sense of pride, being the uncle of a real soldier. Other vivid images flooded my mind: Cody’s mom, my sister Anita, holding baby Cody on the front lawn; Cody as a toddler, sitting on the couch as one of the “3 Amigos” with his older cousins Eddie and Kevin; Cody as a little guy, with a somewhat unruly mop of curly hair and a perplexed look. The images continue to swirl through my mind. Like anyone who dies far too young, their faces remain etched forever in our consciousness, frozen in time.

From Cody’s army career, I learned that we should pursue our dreams and strive to be our best. Cody was only 20 years old in July, 2007. By all reports, he was a good soldier. He was a bronze star-winning paratrooper in the 82nd Airborne Division of the U.S. Army. He made a lasting impression on the guys in his platoon. Although Cody was somewhat rudderless as a teenager, his future in the Army looked bright. He was learning a trade while fighting for his country and its ideals and beliefs. And I was happy to hear that he also found God in his last few weeks.

Being away from Cody taught me the importance of letting those we love know how we feel about them. From the emails Cody and I exchanged while he was in Iraq—which I have saved— I know that Cody knew how I felt. The common theme of my messages was that I loved him, we were proud of him and his accomplishments, and that I could see his growing maturity and the promise of a bright future… and that we would pray for him everyday. Now he has set a place for us in heaven, and he’s praying for us.

I’ll never forget the call on Sunday, July 29, 2007. It’s like a nightmare playing over and over. I picked up my vibrating cell phone and my brother-in-law, fighting tears, said, “Cody’s gone.” I didn’t know what that meant— where did he go? Did he go AWOL? But Jim explained what he knew about the circumstances as I heard my sister, Cody’s Aunt Janet, crying inconsolably in the background. Like everyone, I was in shock, with thoughts ranging from denial to anger to sadness. I felt so nauseous and I hardly slept that night. The next day I was in a fog all day. I wanted to think it was all a dream that never happened. And I still wish that were the case, that I’ll wake up and Cody will be here—his goofy self smiling and laughing at us all.

Cody’s death taught me that when someone dies, a piece of us dies, too. We need to hold tight to the happy memories. The death of someone we love comes to us like a punch in head, an unexpected and unwanted reminder of our own mortality. We have a finite time on this planet and we are here to help and to leave a lasting impression on people who cross our paths. We need to make a positive impact on the world in the short time we’re here.

We’ll never forget Cody, and it is my hope that my family’s struggle to cope with Cody’s death might provide lessons for your family, too. We learned a lot from Cody and from his passing: that time is fleeting so you should go for it, take a chance, and live life without regret. None of us knows how much time we have together. Perhaps someone reading this will take a long overdue step to bring their fractured family a little bit closer together, make a phone call they’ve been putting off, mend a fence, hold a hug a little longer than expected. I hope that one less child gets reprimanded today for some silly little infraction that in the grand scheme of things really doesn’t mean a lot.

Cody taught me to live each day to the fullest, smile freely and openly, be there for your friends and family, make something good happen each day, believe in something and work at it daily. When I look into Cody’s eyes in that image that faces me every day on my computer, I’m reminded to seize the day and make the most of all that comes my way.

Cody gave up two lives: the one he lived and the one he might have lived. A lot of tears have been shed since he died. None of those tears will bring him back. That’s because Cody is still with us—he never left us. He lives on in our hearts, in a child’s laugh, in a warm smile shared with a friend, in a hug for a loved one. Tears won’t bring Cody back because he is still here with us. As your loved one is with you.