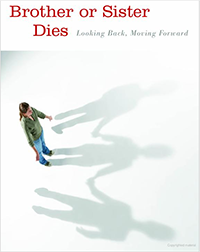 “There is no other loss in adult life that appears to be so neglected as the death of a brother or sister,” says bereavement specialist and psychologist, Therese Rando. Rando is one of many specialists who was interviewed in the book, When a Brother or Sister Dies: Looking Back, Moving Forward by Claire Berman.

I received the book two days before I traveled to Texas for the second anniversary of my brother Thomas's death. I didn't pick it up to read, though, until the eight hour ride back home. After an emotionally long and exhausting weekend, I wasn't sure how, or if, I could handle any more… even if it meant a book that could help me heal. To my amazement this book was a quick and easy read. The author, Claire Berman, interviewed psychologists, bereavement specialists, and siblings who have suffered the loss of a brother or sister. She herself is a surviving sibling.

When a Brother or Sister Dies is so much more than a self-help book. It’s a journey of self reflection and healing. As I traveled through the different stories ranging from death by illness, accident, suicide, and so on, I found myself saying “Yes that’s it! That's how I feel. Oh my! I'm not crazy or alone. I'm actually normal in dealing with the loss of Thomas.” As odd as it may seem, I actually felt excited that this book had come to me! Throughout the weekend, people had told me I had to be strong for my parents. People had asked how they were doing without inquiring how I was doing. After feeling totally isolated and burying my hurt so deeply, I had this book that just GOT IT!

I appreciated that this book never really said “you have to do this” and “don't do that.” It isn't your typical self-help book. Instead, it's a compilation of interviews which illustrate that everyone takes their own path, and that's okay! Many of us who have lost a loved one hate the term “moving on.” I know I do. Move on, really? I lost my best friend, my sidekick, the other half that was going to help me when my parents were older. And you want me to just move on! Is that even possible?

When a Brother or Sister Dies gave me the inner strength to realize that it's okay to move forward. Forward is the key, not “move on,” but move forward. As stated by Phyllis Silverman in chapter 12, “I don't know what it means to resolve a death. I think people make accommodations. They find a way of living with their pain, with their angst.”

In addition to the many personal stories, this book presents ideas on how to honor and remember our loved ones and includes a list of wonderful resources in the back. It is a great read whether two days or ten years have passed since the death of your sibling. It helps with the new overwhelming pain and fury of emotions you have. You get to see a glimpse of the light at the end of a very long and lonely tunnel.

At the end, I felt recognition and validation for my sibling grief. These two things were stated early in the introduction of the book as its main goal. I suggest that after you read this book you scan it and highlight the areas that speak about you. Then pass it on to someone close to you who may not understand. This will give them insight into your daily struggle as a sibling survivor.