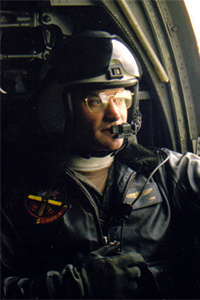 For many of us it is hard to open our hearts when our loved one has given the ultimate sacrifice to our nation and we remain behind. Yet we still have all the love to give that we have shared through the years and it doesn’t stop with death. In the beginning, many of us can only try to get through each day and survive with the pain in our hearts that comes from such a great loss. Our hearts, out of necessity, close up as we try to deal with the pain. Gradually we begin to heal, and wonder how we can keep our loved one’s name recognized and not forgotten. ~ Carol Lane in Good Morning from TAPS December 5, 2009

Ten years ago the picture I had of my future was focused on teaching elementary school for as long as I could, enjoying my grown children and their families, and taking an occasional trip to the beach. Events, however, can radically change the course of your life.

At the end of a critical week at school, the secretary came to my door to say that I needed to go home; there had been an accident. I drove home thinking, “Well, whatever it is, I can handle it. It is summer and I have more than enough time to help whichever child it is to recover from an injury.” Our son Sergeant Bryon Lane was a Marine who had just transferred to Camp Lejeune from the Presidential helicopter squad. Our daughter Bethany had just graduated from college and was considering looking for a job near her brother. Life was good.

I turned the corner of my street and there before me was the government car. My heart sank and I knew there was nothing my mothering skills could do to help the situation. How could this happen? We weren’t at war. Bryon should be safe. Why were these Marines at my house? Although I knew there were military deaths in peacetime, it hadn’t crossed my mind that it could happen to us. While training for a night flight over the New River at Camp Lejeune, Bryon’s helicopter had crashed into the river killing him and two other crew chiefs.

The hardest part for me in those early days was getting out of bed in the morning. After a wakeful night, I would finally fall asleep out of pure exhaustion and wake to realize that Bryon was no longer alive and that I wouldn’t see him again on earth. It was a time of searching for a way to live in a world that kept moving on while I remained in a state of anguish. I couldn’t sit in one place for long without crying.

Not long after the funeral I contacted an organization I had read about on a small brochure. I needed to find help with this overwhelming grief. That organization was TAPS and the person I found was Ellen Andrews. We talked on the phone, and I started attending the TAPS chat. She must have listened to my story a thousand times, but Ellen always showed me the respect and caring for which TAPS is known. Through TAPS, I found my way to start healing.

That first year I made a scrapbook and included some of the precious memories I hope others will read someday to know who Bryon was and what he stood for. I added cards I had saved over the years. One of them was a cute card from Bryon asking, “If you had it to do over, would you still be my mother? I hope that you would.” At the time I thought that was a strange question to ask, but now I find it reflective. Knowing all that has taken place, would I do it all over again?

The answer is, “Yes, in a heartbeat!”

Despite the pain of losing Bryon, the thought of never knowing that special person and having him touch my life is something that I could never put aside. The years of watching him grow and the ideas and events that he introduced me to are awe-inspiring.

A year after Bryon’s death my husband retired. I found I needed to be at work, teaching language arts, math, science, and social studies to 5th graders. Concentrating on my students gave a sense of purpose to my world that now seemed strangely remote from my community. I soon found, though, that it wasn’t enough anymore just to teach. I needed to do something to honor my son.

In finding ways to honor my son, I began to think about what was important to Bryon. First of all, he was a Marine. He loved being a Marine and serving his country. He also liked to write and listen to people. Well, I couldn’t become a Marine, but I could maintain the military connection by listening to others as they struggled with the death of a loved one in the military. Okay, that sounded good. Now I needed a place to start. I began in the TAPS chat room where I started listening more than talking.

Next I attended TAPS Peer Mentor Training at the National Military Survivor Seminar. I began to reach out to people who needed to hear from someone who was farther along the path. In time it became difficult to keep up with all of them in addition to my full-time teaching job. This led to the birth of my “Good Morning” Saturday Message for survivors, a weekly message inspired by questions survivors ask or ideas they send. Not only was I honoring Bryon’s memory, but I was discovering a whole new group of friends who became family. We understood each other intuitively and were there to help one another through many of life’s difficulties.

In the years since Bryon’s death, I have also found a way to honor him in my workplace. Each November I organize a Veteran’s Day Tea for the 5th graders at our school. We invite veterans who are connected to our students as well as those from the Vet Center, the Navy Reserve, the VFW, and the American Legion in our town. To open the tea, we say the Pledge of Allegiance, and the children sing our national anthem. The veterans bring pictures or anything they would like to share. Last year we had a Power Point Presentation from a soldier deploying to Afghanistan and a disarmed torpedo brought by a retired sailor! We feature a large map so the veterans can show the children where they were stationed. The 5th graders look forward to our time with the veterans and the event grows each year.

After more than eight years, there are still times when I feel I am not in the driver’s seat of my life. I find that my anxiety increases when I am not giving myself enough time to sort through the feelings that come up as life happens. As time passes, events in my life may reopen the hole in my heart, and I find I need time to work through my feelings anew. I am sometimes forced to look at where I am in this process and ask myself, “Can I handle this? What have I learned from the past?” I am the first to tell you that there are still some things that I don’t wish to share with everyone yet. However when faced with someone who is hurting, those walls break down. Part of me knows that connecting to others is a way to start the healing process, and I reach out.

My volunteer work through TAPS has given me so much. I can channel the love I had for Bryon into helping others. In return I receive the gift of friendship and a feeling of great warmth to know I finally can care for others again. Through email messages and my travels to the TAPS seminars I find the strength that comes from opening my heart to others.

Now I have a glimpse of what Bryon found when he joined the military. We have a wonderfully diverse nation, and it is an honor to help those families who have given so much for our freedom. 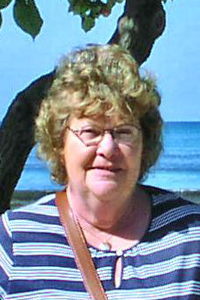 By Carol Lane, surviving mom of Marine Sergeant Bryon Lane Carol Lane is a member of the TAPS adult outreach staff and has worked as a peer mentor and presenter at TAPS seminars. Before coming to TAPS, she was an elementary teacher in Vermont where she also worked with children with emotional disabilities. She has a BA in sociology from Hartwick College and a MEd from Plymouth State College in Plymouth, NH. Carol’s Marine son Bryon died in an aviation accident in July of 2001.