How the Marine Corps Marathon became a fundraiser for TAPS

On June 25, 1996, at three o’clock in the morning, my life changed forever when three Air Force officials knocked on my door to tell me that my husband and best friend, Dee “Soup” Campbell, was one of nineteen Airmen who did not survive a terrorist attack at the Khobar Towers Military Housing Complex in Saudi Arabia. I couldn’t comprehend this, since I knew he would be coming home in two days. I didn’t cry. It wasn’t that I didn’t want to, but something kept me from doing it. I was stoic and wanted to be the one who consoled everybody else. 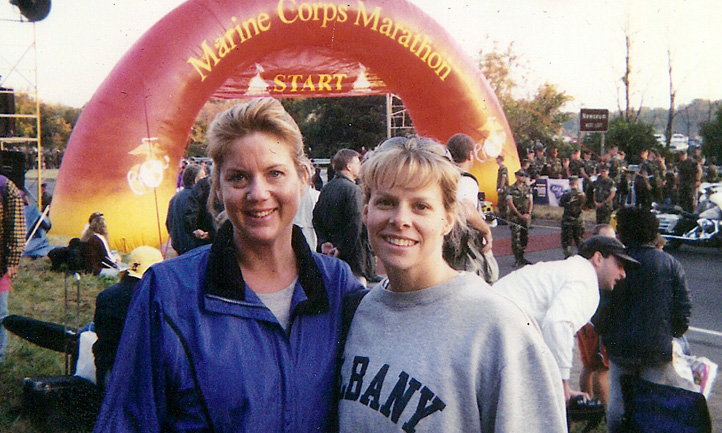 Once I got past the shock, I immediately went numb and stayed that way for almost two years. I went through the motions of being a new young widow, but deep down I couldn’t accept it. Dee had been on long deployments plenty of times. I just allowed myself to think this was another deployment. People offered their condolences, and also the usual remarks that a young widow commonly hears… “You’re young. You’ll get married again.” and “He’s in a better place,” (which I totally believe is true, but I didn’t want him to be there yet. I still wanted him with me.) I heard all these things, but I still couldn’t cry.

As I approached the second anniversary of Dee’s death, I received a brochure in the mail about the upcoming TAPS National Military Survivor Seminar in Washington, DC. I was headed to the garbage can to throw it away when I decided to stop and look at it. I had been desperately looking for others in my situation, especially those who had begun to heal. I wanted to see that there was hope for me. So I went to the seminar and found just that. It was the one place I did not feel like an outsider. I was also allowed to keep that military connection that I loved so much.

Getting my second wind

A month after the seminar I made some changes in my life. I moved to Texas, and went to graduate school. I knew this was a positive step, but at the same time I felt like I had hit rock bottom. I was finally experiencing my grief, and the flood gate of tears opened. Depression set in. I knew no one in Dallas at the time, and didn’t have any support there. The TAPS chat on Tuesday nights became my source of support. I remember those new friends being so open, supportive, and loving towards me. I now had friends who “got it.” My time for grieving and healing had finally arrived. I allowed myself to mourn, which in turn allowed me to begin to heal.

In the winter of 2000 nearly four years after Dee’s death, I met Lori Hunter, another young military widow. We were traveling to a TAPS retreat and had known each other a little over an hour when we discovered that we had something in common: running! She shared her idea to form a team in the Marine Corps Marathon as a fundraiser for TAPS. I thought she was insane. Running was a hobby for me, not a commitment. However, I started thinking about how much TAPS had helped me in my journey towards healing since Dee had been killed. This would be an opportunity for me to give back to an organization that had truly made a difference in my life. On that day, the TAPS Run and Remember Team was officially born.

Keeping my eyes on the goal

Training for my first Marine Corps Marathon was incredible. I actually set a goal—a word that I had dismissed from my vocabulary since Dee had been killed. I had a training schedule that I followed to a tee. Not only was I doing this for TAPS, but also in honor of Dee and his eighteen Air Force comrades killed in the Khobar Towers bombing. I was determined to complete this mission. Many times I felt not only Dee’s presence during my training, but the presence of his comrades. This made it even more special for me. I wasn’t going to quit!

On October 22, 2000, Lori and I completed the Marine Corps Marathon and raised nearly $5,000 for TAPS. I felt a huge sense of accomplishment, and I couldn’t wait to do it again the next year! In 2001, I was the only member of the TAPS Run and Remember Team, but the following year we grew to a team of eleven runners. That year we had our first TAPS Pasta Dinner the night prior to the race. Slowly, the TAPS team was making a name for itself. We grew to a team of thirty-five the next year, and sixty-five the following year.

We wanted to include more people in this meaningful event, but knew that not everyone could run a marathon. Since the Marine Corps Marathon included a 10K race and a one-mile Healthy Kids Fun Run, we incorporated those events into the TAPS Run and Remember Team. The TAPS team has continued to expand each year, now fielding more than 350 runners, including children.

Everyone can be part of the TAPS Run and Remember Team! Our team includes TAPS survivors, military members, and just-plain-wonderful folks who want to reach out and help support TAPS. Team members are asked to run in memory of a fallen hero. If a runner doesn’t know a fallen hero, TAPS connects him with a surviving family to run in honor of their fallen hero. It is truly meaningful for both the family and the runner.

You don’t have to be an expert runner to be part of the team. We run, walk, or do a combination of both. It doesn’t matter, though. Our team isn’t about being the best athletes. It’s about coming together in celebration to honor the lives of our fallen heroes.

Since our Run and Remember Team is spread out across the entire country, we offer support in various ways. After runners register, TAPS provides a website to post a photo of their fallen hero and keep track of their fundraising. We also provide support through emails and a monthly chat session. The chat session gives runners the opportunity to meet fellow teammates and receive training tips and advice.

Once race weekend arrives, we truly do celebrate. We begin by supporting the kids during their Healthy Kids Fun Run on Saturday. We follow up that evening with our annual Pasta Dinner, taking time to remember and celebrate the lives of our fallen heroes. Sunday is race day! We proudly wear our TAPS singlets, complete with photos of our fallen heroes. We cheer each other on the course, and have the most fantastic supporters, both at the finish line and at our TAPS Run and Remember Team tent. This doesn’t mean we can’t or won’t shed a few tears during the weekend. At TAPS, we are always free to shed tears, but on this particular weekend we also have a lot of smiles!

I have often said that running and training for a marathon is a tough challenge, but losing the love of my life has been the toughest thing I have ever had to face. I believe I speak for all of my surviving teammates when I say that our participation in the marathon has been a healing process in our journey. By running the marathon for TAPS, we are not only paying tribute to our loved ones, but also raising funds to reach out and help others who will face the pain we have had to endure. I know our loved ones are proud of us!

By Marie Campbell, Surviving spouse of US Air Force Sergeant Dee "Soup" Campbell: Marie Campbell is the surviving spouse of Sergeant Dee Campbell who died on Jun 25, 1996 when a terrorist truck bomb exploded at the Khobar Towers in Dhahran, Saudi Arabia and took the lives of 19 airmen. Marie has been a part of the TAPS family for 15 years. She has volunteered in many ways including facilitating support groups, peer mentoring, and conducting various workshops. Marie is currently the Director of the TAPS Run and Remember Team.
Related Articles: