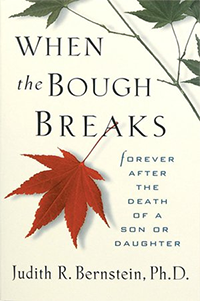 Forever After the Death of a Son or Daughter

Note: All reviews are the opinions of the reviewer and do not constitute an endorsement on the part of TAPS.

I have always been an avid reader. I love books and literature for education and fantasy. Even as my bookshelves filled up, I obtained more. I loved the feel of being in a room full of books, and I was on my way to creating libraries in each room of our home. Whenever I had a problem, I read books. I have been dubbed the Self-Help Queen in my family, and I don’t think that they mean it positively. It was only natural for me to turn to books when I needed them for something that I had never needed them for previously: comfort.

After my son Jesse, (SN4- USN) died, I could not consume books fast enough. I could read several at a time, often re-reading them, and always getting extras to give as gifts to others. I appreciated good books because they were always there when I need them, like a best friend. Whatever the hour or day, books are only an arm’s reach away. It has been my experience that a good book enhances my life experiences, often picking up where a good therapist ends. On a rare occasion, a book especially ministered to me: providing hope when I felt hopeless, focus when I felt distracted, and reassurance when I needed to know that I was not crazy.

One such book is When the Bough Breaks by Judith R. Bernstein, Ph.D. The author and her husband, both psychologists, experienced the death of their son when he was seventeen years old. Though the book is not about military death and survival, it is about the journey that the bereaved walk, despite the cause of death of our dear ones.

What is the journey? Learning to live without our loved ones for the rest of our lives… How we evolve and who we become as a result of having our lives turned inside out by the death of our children. Though the book is written from the parent’s perspective, it holds true for other relationships in many areas of adjustment.

When the Bough Breaks is unique in that it is a study of what happens to people in the aftermath of the trauma of intense grief. Do they forget their children and if so at what year? Do they move on, get over, or accept the deaths? If so, how did they do so? To answer these questions, the author interviewed parents whose children had died in the time range from five years to thirty-seven years prior, with ten years being the average. Their stories are shared throughout the book.

The book is divided into two parts; The Way through Mourning which discusses Grief, Factors that Shape Mourning, and the Nature of the Death. Part Two looks at The Rest of Our Lives: Altered Perspectives, Mourning in Marriages, Family Relationships, Social Relationships, and Religion and Spirituality.

The author states the premise of the book in this way, “Our attitudes toward life change dramatically following a trauma. We don’t get over a trauma; we adapt our way of thinking and feeling about the world as a consequence.” It is the author’s belief that the course of healing involves integrating that trauma, not overcoming it. People don’t recover; they adapt. They alter their values, attitudes, perceptions, relationships and beliefs, with the result that they are substantially different from the people they once were.

The families that responded to the survey for the book expressed that they feel connected to other bereaved parents. When we are with other bereaved parents, we feel at home. We can talk about our children, show pictures, and speak freely. From the interviews of families in grief, the author confirmed what many of us live: that we’re not crazy when we see a young man in public that looks like our child and we watch him, grateful for the moment. We learn that we will never get over that feeling, that we can live with those moments and still revel in the day.

I found this book particularly helpful because it was written not only by a bereaved parent, but by the multiple parents who had survived; who had made it through those first seconds, minutes, hours, days, months, and years. They discuss all the issues that I had and still face, eleven years after my son’s death; issues known to mothers, fathers, wives, and husbands. Long after those closest to me had given up on my grief, and ultimately on me, the stories assured me that I was not crazy or alone. I was simply forever different.

I felt that the book was so insightful and groundbreaking into the world of child death grief, that I assumed my family and friends would want to read it to understand me. I was wrong. It must be easier to avoid death than to face it, even avoiding the family and friends who cannot avoid it. Ironically, the people who tell me to get on, move on, and get over it tell me that if it were their child who had died, they would not be able to get out of bed. I still don’t understand why they expect something different of me…

As our TAPS Peer Mentors have said, “Grief changes your address book,” and mine was no exception. In time the names crossed out were replaced with new names; new family and friends. People that I could feel at home with; where I could speak Jesse’s name, cry, laugh and wonder without rolling eyes telling me to move on, get over it, or get medication. And meanwhile, I still had my books.

As I move through my grief, I still read When the Bough Breaks at least once a year. I get something new and useful out of it each time; comfort, reassurance and hope. My hope is that you will, too.

By Colleen Betlach: Colleen Betlach is the surviving mom of Jesse Henry and founder of Beyond the Folded Flag (www.beyondthefoldedflag.com ), a long-term grief counseling and bereavement education program for surviving family members of military, contractor, or terrorist-related casualties. Colleen is a TAPS peer mentor and Care Group facilitator and continues to volunteer part time at a Florida VAMC serving the Chaplain Services on the Hospice Unit. She notes that her personal motto that people shouldn’t die alone parallels the Soldier’s Creed which states, “I will never leave a fallen comrade.”
Related Articles: