A Journey from Arlington to Arlington

I used to think life was an adventure. I had lived through so much in my few years... I experienced loss early in my life when my mother passed, but I still I believed it was the natural order of things: children bury their parents. As I reflect on that period I understand now that it was part of a master plan, one that I did not understand, one I could not control, one that would carry me through today and the rest of my life. 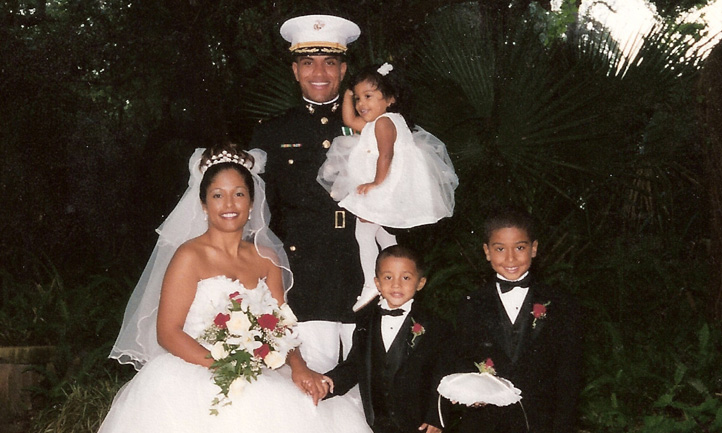 It was March 29th 2008, a bright sunny day in southern California. I had returned home from doing Saturday errands when I got the call that my husband had been seriously injured when an IED struck his vehicle in Iraq. As my world began to collapse, as I gasped for breath, I called on a friend I knew could help me navigate as I sailed astray into fear and uncertainty. Needless to say the friend was a fellow Marine, Derrick Jones. Nevertheless, the wait seemed endless.

My heart sank as I looked at my children: Xavier, Xander, Tia, and Gladys. Without words, they knew our lives would never be the same. My 3-year-old Gladys, not understanding why, but knowing something had gone horribly wrong, began to cry with us. I felt my friend, Leticia’s soft hand on my back and the slight sound of her lament. I looked at Derrick for answers and knew he had none to give. I heard the distant voice of a Marine casualty officer “Mrs. Hall we regret to inform you…” Once again the master plan was not mine to command.

As our family prepared for the arrival of my husband’s remains, the tributes to his life, and his final resting, we questioned everything: his career, his injuries, and ultimately our faith. I thought, “How did I get to this place? I had simply married a good man who looked absolutely stunning in dress blues. How did I become the statistic? This happens to other families, not ours. I don’t belong here.”

Some days I comprehended and accepted the loss, other days I still hoped for that call that he was in fact okay, and that it was all a big mistake, or that I would wake up from this nightmare and find him lying beside me taking up more than his half of our bed.

Seven weeks passed, and I traveled to Virginia to TAPS National Survivors Seminar and Good Grief Camp for Young Survivors. I was trying to do anything I could to help my children. I knew I had made a good decision, but as I left them with their mentors on that first day I sobbed because I thought I was a bad mother. What kind of mother has to bring her children to such a camp?

I attended a seminar on “How to have a Good Bad Day,” led by Darcie Sims. This woman seemed to know everything about me although we had never met. She tapped into the very grief I had tried so hard to contain. I thought I was keeping my composure until she asked a question of the audience “…and in the end what do we all want?” In my mind I had the only right answer in the room, but then as if my very thoughts had been written on the wall, the entire room replied in unison “to have them back again.” I could no longer hold it back. With no air in my lungs, no strength in my body, no shame in my pain, I bent over and allowed myself to cry.

During the weekend, we were invited to speak aloud our loved one’s name, rank and relationship during a memorial ceremony. With the support of my newfound friends and family in grief, I walked to the podium and held my crystal teardrop; a symbol of the many tears shed since we’d lost our loved ones. Fully prepared to say what was suggested, I opened my mouth but had lost my voice. The simple lines I rehearsed while standing in line were somewhere lost in that crowd. A mixture of grief, pride, pain, and hope filled the room. I again tried to speak the simple sentences, but nothing came out. I looked over at Juan, the father of an Army soldier, I looked down at the podium where a poem was written but had not yet been read, I searched deep in my soul, and the words finally came out “Seven weeks ago I lost my best friend, father to our four children: Lt. Col. William G. Hall, USMC, OORAH!”

At the Saturday night banquet for the adults, I understood and felt the true meaning of the empty seat in the front of the room. The Missing Man Table was a place setting I had seen at many a Marine Corps ball, but never truly appreciated. The sound of TAPS being played devoured my fragile composure. I heard a mother painfully tell a counselor “I shouldn’t be here,” and knew exactly what she meant, her words carving themselves into my heart as if I had known and loved her son myself. That weekend at TAPS changed my life.

As I look at photos I see those changes. The sorrow my soul carries because I felt so abandoned was now visible in every feature. My face lacks the color it once had. My eyes, barely visible from the constant crying, are heavy from sleepless nights. The smile I use to face the world lacks the enthusiasm of knowing I had it all. My posture is dispirited knowing I have been defeated by something greater than me.

In the midst of my grief my friend Leticia, an avid runner, suggested we run the Marine Corps Marathon together. She knew me well enough to know I needed a goal if I was to survive this leg of my journey. During the training for the Marine Corps Marathon I often questioned my sanity. Why would I put myself through this, knowing the introspective sojourn I still needed to endure? As I ticked away at my training miles, my thoughts went often to my husband: his laughter, his dedication to the Marine Corps, his love for our family, his tears for his Marines, his devotion to his mother, his adventures.

While I train, I remember the gathering at our home before the deployment when I met the spouses and families of Will’s fellow team members. I remember the father of one young Marine who had told Will “I’m only loaning him to you, I want him back!” and how the weight of that statement carried so heavily on his heart that night. I remember the endless calls I made to family and friends, how often the silence on the other end was deafening. I remember hearing men sob uncontrollably. I remember the service held at Camp Pendleton in which I tried to comfort total strangers and wives for whom I was their worst nightmare. I remember gathering with the team upon their return from Iraq, using humor to disguise my horrible envy of these wives because they had their husbands back and I didn’t.

With every step in training I gained more clarity. I cried, I laughed, and I sang at the top of my lungs accompanied by my iPod, even when I had no breath left in me at mile 18.

My journey has brought me here once again, to Arlington: the place where Will lies with our nation’s heroes and presidents, the place where I said my final goodbye, the place which will forever hold a part of who I am. I stand here challenging my body to endure 26.2 miles, yet with every step and mile my heart has traveled infinitely further. God Bless America, our destinies, and you.