After the flag is folded, and after the last echoing notes of Taps have sounded on the bugle, the overwhelming grief of losing a parent in military service comes to rest squarely on shoulders too small, too fragile, too young, and too inexperienced to bear the burden alone. Tucked away from the public spotlight, the grief following a military death continues for months and years: horrendous, traumatic, and complicated by a number of factors. Recognizing how different a military death is for the surviving children is an important step in helping them cope with grief. 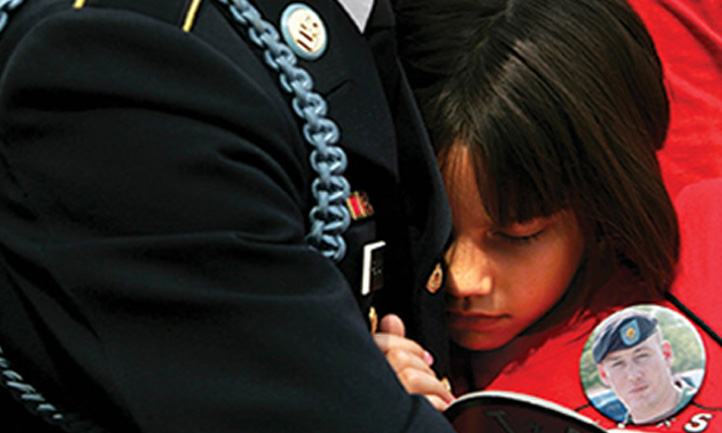 Absence of the deployed parent

During a long deployment, a child may feel responsible for his siblings or remaining parent. “Be good until I get home and don’t give mom a hard time.” If the father doesn’t return, the child often feels that the mandate remains in effect forever. Acting “like a kid” again seems like a betrayal of dad’s trust.

Another aspect of deployment is that the families become accustomed to their loved ones being gone for long periods of time. This makes it harder, especially for a younger child, to realize or acknowledge that his parent is gone forever this time.

The death notification of an active duty member of the military can be highly traumatic. A child raised on a military base knows the significance of a government vehicle coming to his house, with a chaplain and a notifying officer both in Class A Dress uniform. One young child said, “Daddy promised that the Chaplain would not knock on our front door. When Mommy saw the car pull up into the driveway, she knew right away what had happened. So she walked out into the driveway to receive the terrible news. She made sure that Daddy kept his promise.”

Condition of the loved one’s remains

Because of the nature of combat injuries or training accidents resulting in death, the mortal remains of the deceased may not be viewable. Children are often haunted by images of what may have happened to their loved one. In addition, the family will have unanswerable questions regarding what was left of the body. And, lastly, the children are prevented from verifying the identification of their parent for themselves, or saying a final goodbye by either sight or touch.

The military does a wonderful job of memorializing those who die in service to this nation. But an added complication of a military death in a combat zone is the lengthy process of recovering and transporting the body home before the actual burial can take place. The family has no control over this process and receives very little information as to an expected time frame. This process prolongs the family’s uncertainty and disbelief.

Meanwhile, the family must plan a funeral service in the soldier’s hometown, and possibly a second service, if the deceased is to be buried in a national cemetery such as Arlington National Cemetery. Travel arrangements must be made. And all this time, the children really have no functioning parent, since one has died and the other is consumed by grief and the pressure to complete the arrangements for the disposition of the spouse’s mortal remains.

These ceremonial observances are often repeated when the deployed unit of the deceased service member returns to America. The family is invited to attend yet another memorial service, sometimes many months after their loved one has been buried.

Because of the public nature of a combat death and the political nature of war, some families have been subjected to vindictive protests at their loved one’s funeral and interment. Picketers have displayed extreme insensitivity by shouting at the bereaved family and waving signs telling the children and surviving spouse that God hates their country in general, and their loved one in particular. This tactless behavior is forced on the grieving family at a time when they are least able to cope with the additional trauma.

After the funeral, the family is chronically faced with images that can intensify their grief. Newscasts are filled with reports of death and descriptions of destruction. In an ongoing war, scenes from the combat zone are aired repeatedly. Children have to endure extensive media coverage, not only of their loved one’s death, but also of subsequent deaths as they occur.

A bereaved military child feels especially isolated when his deceased parent’s unit finally returns home from a combat deployment. The child bears the pain of watching the joyful homecoming ceremonies and reunions of their peers with parents that are returning home alive and well. This painful and difficult event increases the feeling that the child is alone on his grief journey.

Isolation from the military community

Families that have been struck by the tragic loss of a parent serving on active duty are required to move off base within one year of the death. This is a drastic change for children who have known nothing other than the military lifestyle and the sense of pride and community that comes with it. This secondary loss greatly impacts the military child. The stress of adapting to a new school situation and a new neighborhood adds to the stress of the grieving process.

Military children have pointed out that the civilian children in their schools don’t understand the military culture, and will torment them about not having a dad or mom. One twelve year old told of being taunted by another boy in his class who said, “If your dad had done his job right, he wouldn’t be dead.” The bereaved boy was humiliated and deeply hurt. At school, he had no one to turn to. And he didn’t want to worry his mother, who was already struggling as the sole surviving parent in the family.

Tension between pride in service and the emotions of grief

There exists for most military survivors a strange dichotomy between the devastating negative emotions of grief and the feeling of immense pride in the accomplishments of the loved one. It is uncomfortable to speak of the pride outside of the military context because many civilians can’t identify with it or mistake it for a lack of sorrow.

In spite of the pride, all the other usual emotions for grief are in evidence. Children often express guilt that they didn’t write enough letters while their parent was deployed, and fear that they were not behaving well while mom or dad was off at war. Anger can be aimed at the terrorists who caused the death, the government and its officials, or even the military itself that sent their mom or dad to war.

There is much that can be learned from our American military culture, including honoring the lives that were lived and taking pride in their accomplishments. Being a military family requires special commitment and dedication. The military death requires a special type of grieving, allowing room for the customs and courtesies of the branch of service, the military honors, the assignment of a Casualty Assistance Officer, and the certainty of relocation at some point.

TAPS is a ready resource for families struggling with the death of a military service member. A significant part of the TAPS mission is to minister to the mental, emotional, and spiritual welfare of children who are a part of the military family and have suffered the traumatic death of a parent. The children of the men and women who have died in service to our country are proud of their family member’s military service. They are among the most worthy recipients of our help as they face the fears and struggles that may lie ahead for years to come. At TAPS, we listen to their stories and help them as they strive to “Remember the love, Celebrate the life, Share the journey”

That is the message of TAPS—learning that we can survive the pain, cherish the memories, and gain strength from walking side by side down this painful journey of grief, alongside those who understand and care.

Excerpted from the Military Children and Grief chapter of Hospice Foundation of America’s 2008 book Living With Grief: Children and Adolescents.