Families with surviving children ages 6 to 18 who have lost an immediate family member can apply to attend the 2018 NFL Pro Bowl with teams4taps.

TAPS is excited to announce an opportunity, hosted by the National Football League, for a select group of surviving military kids and their families to travel to Orlando, Florida, from Jan. 25 to Jan. 29, 2018, to attend the NFL Pro Bowl! 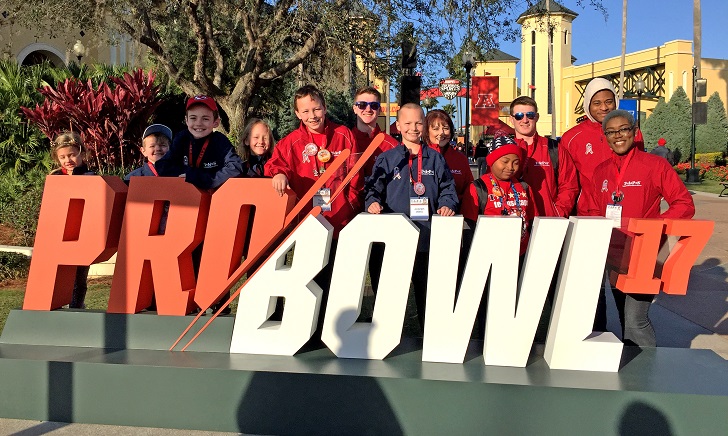 TAPS kids (ages 6 to 18) and their families, will be hosted by TAPS and the NFL for a weekend of youth-related events. The 20 families selected will participate in events such as watching an NFL practice at ESPN Wide World of Sports at Walt Disney World, attending lunches and dinners with TAPS families, meeting NFL players and special guests and, finally, attending the 2018 NFL Pro Bowl at Camping World Stadium. Families will also have time to spend with each other as we reflect on and remember our fallen heroes.

Apply now to join us for this special event.

Flights, lodging, tickets and group meals will be provided through the generous support of the NFL. Families will stay at the Armed Forces Recreation Center at Walt Disney World Shades of Green. Attendees will be responsible for any incidentals such as baggage fees, snacks, souvenirs, etc.

Those interested should submit an application. Applications will be accepted through Oct. 25 or until the first 200 applications have been received, whichever comes first. This opportunity is for children who have lost an immediate family member who served in the Armed Forces. TAPS kids must be accompanied by a parent/guardian or a surviving adult family member with permission from their parent/guardian. There will be a limit of five people per family, with a maximum of two adults per family. Any additional family members outside the TAPS child(ren) and parent/guardian must also be an immediate surviving family member. Families must commit to attending all group activities and meals and participate fully, to the best of their abilities, to be eligible for this trip.

Applications must include a story about why football is, or has been, important to the child and/or family. The story can feature any connection to the sport — from professional to youth football, from your favorite NFL player to your local high school team.

Although TAPS would love for all surviving families to attend, we have a limited amount of spots available. For this reason, this opportunity will be filled using a random selection process. Those who have attended a trip or event with TAPS where flights and lodging have both been provided (not including seminars), as well as those who have recently been part of an NFL Salute to Service event, will have a lower priority in the random selection. Those who attended the 2017 TAPS Kids Pro Bowl Weekend with teams4taps are not eligible to participate this year. Applicants will be notified the first week of December if they have been selected to attend.

If you have any questions, please email teams4taps@taps.org or call 800-959-TAPS (8277) and ask for the Sports and Entertainment Department.