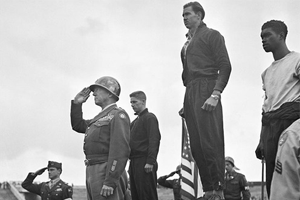 Tony Vaccaro Studio, the National Military Family Association, Tragedy Assistance Program for Survivors, Operation Troop Support and Patton Veterans Project are excited to join forces in hosting a charitable fundraising event at the photographic exhibit “Tony Vaccaro; War, Peace, Beauty'. Tony Vaccaro, was a WW II photographer and solider, described by the BBC "as the greatest combat photographer of all time". He has been exhibited over 20 times, winning numerous awards, however this is the first time his work is being shown in a gallery setting.

As a former veteran himself, Tony is excited to attend, and will be introduced by Benjamin Patton (grandson of General Patton), as well as Joyce Raezer from the NMFA, Dick Moody from Operation Troop Support and Erin Jacobson from TAPS. The Tony Vaccaro Studio has generously agreed that 25% of sale proceeds will be donated to the relevant charities, additionally to drive awareness and contributions at the venue we will also for the first time offer signed prints of General Patton that Tony took in 1945 in Nuremberg. The event takes place on November 14th from 5.30pm to 8pm in the Chelsea district of NYC, and finishes just before the HBO Documentary will air nationwide of Underfire at 8pm (catering will be provided).

We hope you can attend, however if you are unable to attend and would like to support the event and good cause, the studio is happy to accommodate. Contact enquiry@tonyvaccaro.studio for details. Please use the code “Veterans Support Vaccaro” at the time of purchase (this offer this applies until November 24).