Legacy Mentor can say "My Dad Died, Too" as He Helps Grieving Military Kids

The Tragedy Assistance Program for Survivors (TAPS) announces that U.S. Air Force Capt. Nathaniel Lee is the 2020 recipient of the Senator Ted Stevens Leadership Award. Lee volunteers at the TAPS Good Grief Camp to mentor children who have also lost someone who served in the military. He relates so well to bereaved children because at a young age he lost his own dad who served in the Armed Forces.

Annually, the TAPS Senator Ted Stevens Leadership Award is presented to a surviving family member who lost a loved one whose life included service in the Armed Forces.  The award recognizes an individual who has taken their experience and demonstrated outstanding leadership on behalf of other military survivors. 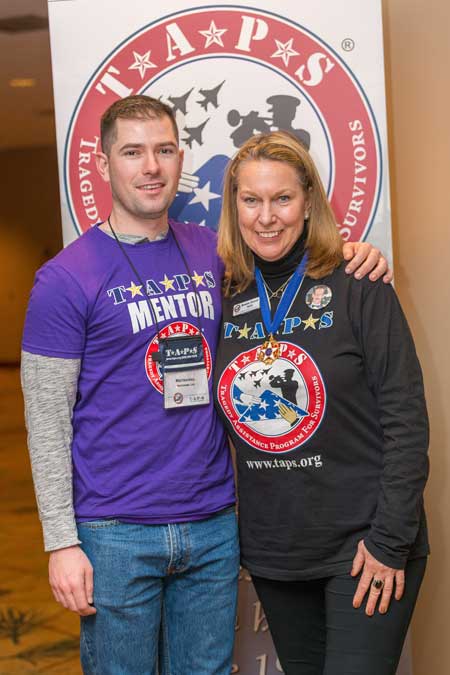 Photo Caption - Honored For Helping Grieving Children: U.S. Air Force Capt. Nathaniel Lee with TAPS President and Founder, Bonnie Carroll. Lee volunteers with the Tragedy Assistance Program for Survivors (TAPS) Good Grief Camp as a Legacy Mentor. Lee was recently named the recipient of the Senator Ted Stevens Leadership Award. “Nathaniel is a wonderful role model for our TAPS kids. He combines empathy for their loss with service to his country. He truly understands how powerful the connection between mentor and mentee is as they try to find their new place in the world,” says Bonnie Carroll, TAPS Founder and President. The award will be presented on March 18, 2020, at the TAPS Honor Guard Gala at the National Building Museum in Washington, D.C.

“Nathaniel is a wonderful role model for our TAPS kids. He combines empathy for their loss with service to his country. He truly understands how powerful the connection between mentor and mentee is as they try to find their new place in the world,” says Bonnie Carroll, TAPS President and Founder.

In 1997, when Nathaniel was 7 years old, his father, Army Capt. Donald Lee, and his co-pilot were killed in a training accident when their Apache helicopter crashed. Capt. Lee left behind a wife, Theresa, and two sons, Nathaniel and his brother, Sam, age 5.

“By the end of that school year, we were moving to Northern California where my mother’s family lived, saying goodbye to not only our friends and neighbors, but the broader military family in which we had lived for many years,” said Lee.

These “secondary losses” can be devastating for grieving children and adults. “In California, we had a loving family and a supportive community, but nobody truly understood. For a long time after my father’s death, I tried to minimize any attention on the subject or avoid bringing it up.”

In 1999, Nathaniel and his family went to their first TAPS National Military Survivor Seminar and Good Grief Camp. He was 9 years old. “The TAPS Good Grief Camp was the first real opportunity I had to feel comfortable talking about my father – sharing his story, honoring his memory and expressing how his loss impacted me.”

He continued to attend the annual camp with his family and returned as an adult to volunteer. “I came back as a mentor after I joined active duty and got an email about volunteering. I remember, being a kid, how important that Good Grief Camp was for our family. As soon as I showed up I knew it was somewhere I really belonged. And I've been going back to event after event for the last couple of years."

Lee says volunteering at the camp means a lot to him. “Being a legacy mentor for me means being able to show that kid, teenager, or even their worried mom, grandma, brother or sister who's there with the kid, that people who have gone through it come out OK on the other side.”

He especially treasures getting to see children grow. "I have a mentee who's local in Colorado Springs with me, and being able to see her grow from that first event that we went to when her loss was pretty new to now, a few years later, where she and her whole family have grown so much. It's really wonderful to see that change over time.”

Lee says his grief journey has taken many turns over the years. He is now serving in the Air Force, married, and a father of two. “Twenty years later, I still grieve the loss of my father in my own way. I keep his flight suit patch in my office and his monogrammed pen in my pocket as constant reminders of not only his service and our family’s sacrifice, but also the incredible responsibility of service members everywhere.”

The award is named after the late Sen. Ted Stevens, who was instrumental in the founding of TAPS. Stevens delivered the eulogy for his friend, Army Brig. Gen. Tom Carroll, who died in a National Guard plane crash in 1992. Two years later, Sen. Stevens recognized the gap in services for military survivors, and assisted Bonnie Carroll as she founded TAPS in Alaska to be the national nonprofit organization offering comfort and care for all those grieving the death of a military member.

The award will be presented on March 18, 2020, at the TAPS Honor Guard Gala at the National Building Museum in Washington, D.C. by Lisa Miller and her daughters, Annelise and Lauren. She is the surviving spouse and they are the daughters of U.S. Air Force Lt. Col. Todd Miller.

If you are interested in becoming a TAPS military mentor or legacy mentor, go to https://www.taps.org/militarymentor

ABOUT TAPS
The Tragedy Assistance Program for Survivors (TAPS) is the leading national organization providing compassionate care and survivor support services for the families of America’s fallen military heroes. Since 1994, TAPS has offered support to more than 90,000 survivors of fallen military in the form of peer-based emotional support, grief and trauma resources, grief seminars and retreats for adults, Good Grief Camps for children, casework assistance, connections to community-based care, online and in-person support groups and a 24/7 resource and information helpline for all who have been profoundly affected by a death of a military loved one. Services are provided free of charge. For more information go to www.taps.org or call the toll-free TAPS resource and information helpline at 1.800.959.TAPS (8277).