ARLINGTON, Va. – The Tragedy Assistance Program for Survivors (TAPS) announces that U.S. Air Force Master Sergeant Melissa Simpson is the recipient of the TAPS Military Mentor of the Year Award. 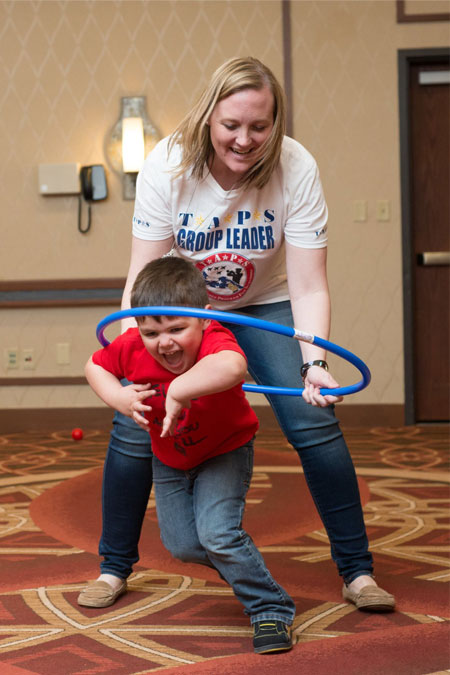 Photo Caption - Honored For Helping Grieving Children: U.S. Air Force Master Sergeant Melissa Simpson has volunteered for seven years with the Tragedy Assistance Program for Survivors (TAPS), helping children grieving the death of a loved one who served in the military. She was recently named the recipient of the TAPS Military Mentor of the Year Award. "We don't get to choose tragedy, but we do get to choose healing. And I am very proud to be a part of healing with TAPS,” said Simpson. The award will be presented on March 18, 2020, at the TAPS Honor Guard Gala at the National Building Museum in Washington, D.C.

Simpson is among the more than 1,300 military mentors who donated 52,000 hours in 2019 providing comfort and companionship to children and teens grieving the death of a loved one whose life included military service to America.

"Our TAPS families have been through the most horrific things. Things we don't ever want to have to go through. But we know that we can lean on each other for support. We have built a community stronger than any other I can imagine,” said Simpson.

The first TAPS event she volunteered at was a campout in Colorado. Simpson was grieving the loss of a friend she served with, who had died two years earlier by suicide.

As soon as she was out of the woods from the camping trip and could get a signal on her cell phone, Simpson called his widow to talk about the bereavement support and care that TAPS provides for anyone grieving the death of a military loved one. Now she sees his family at TAPS events.

After that experience, Simpson, who is a mother of two, committed to serving as a military mentor whenever she can. She now is a group leader at multiple Good Grief Camps each year, supervising other military mentors who are paired one to one with grieving children.

Volunteering for TAPS has helped Simpson, too. “I think [TAPS] has made me stronger in how I communicate my emotions and helps me to be able to sit alongside somebody as they feel their emotions and be OK in the silence.”

And her experiences with TAPS have impacted how she approaches her job in the military. “These are things that I’ve taken back to my units and back to my squadron and tried to educate them on: that we don’t have to have all the right answers, that we just have to be there to walk alongside somebody.”

Simpson feels the military can benefit from the skills typically taught and practiced through the TAPS Good Grief Camp. “I think if we were able to model a little bit more of what TAPS does and what TAPS teaches us about dealing with loss and dealing with grief, our military would not be in the crisis we are today with suicide,” said Simpson.

"We don't get to choose tragedy, but we do get to choose healing. And I am very proud to be a part of healing with TAPS,” she said. “I see the hope not only in the families but in the brothers and sisters I serve with.”

Master Sergeant Melissa A. Simpson is the Flight Chief, Bioenvironmental Engineering Flight at Joint Base McGuire-Dix-Lakehurst in New Jersey. She entered the U.S. Air Force at age 18 in October 1999.

The award will be presented on March 18, 2020, at the TAPS Honor Guard Gala at the National Building Museum in Washington, D.C. by the Threlkel family. Michele Threlkel is the surviving spouse of Air Force 2nd Lieutenant Robin Threlkel and she will present the award with their daughters, Anna and Audrey.

If you are interested in becoming a TAPS military mentor or legacy mentor, go to https://www.taps.org/militarymentor

ABOUT TAPS
The Tragedy Assistance Program for Survivors (TAPS) is the leading national organization providing compassionate care and survivor support services for the families of America’s fallen military heroes. Since 1994, TAPS has offered support to more than 90,000 survivors of fallen military in the form of peer-based emotional support, grief and trauma resources, grief seminars and retreats for adults, Good Grief Camps for children, casework assistance, connections to community-based care, online and in-person support groups and a 24/7 resource and information helpline for all who have been affected by a death of a military loved one. Services are provided free of charge. For more information go to www.taps.org or call the toll-free TAPS resource and information helpline at 1.800.959.TAPS (8277).