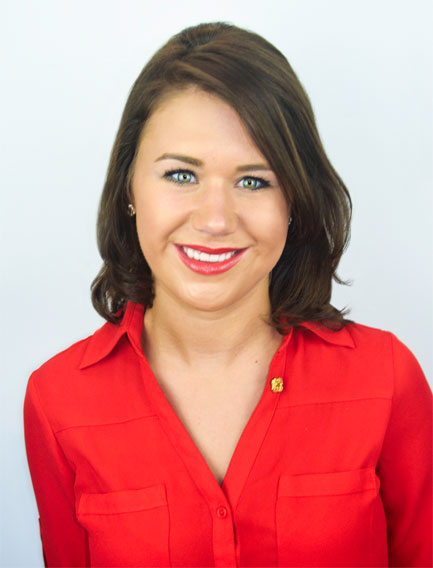 ARLINGTON, Va. –- Tragedy Assistance Program for Survivors (TAPS) Manager of Education Support Services, Ashlynne Haycock, has been named to this year’s HillVets 100 list.  She will be recognized at the HillVets 100 Annual Tribute Gala on March 29 at the U.S. Chamber of Commerce in Washington.

The HillVets 100 honors and recognizes those that have continued answering the call to serve and the gala is an opportunity to celebrate the crucial work of veterans and supporters.

Acknowledging Ashlynne for her work with the “tiger team” of military and veteran service organizations to create the the Forever GI Bill, HillVets Founder and Executive Director Justin Brown said, “We are excited to honor Ashlynne at the HillVets 100 of 2017 for her significant contributions. Her dedication to the creation and passage of the Forever GI Bill, which includes expansion of education benefits to the children and spouses of service members who died in the line of duty, is inspiring.”

In addition, Ashlynne, who regularly participates in veteran and survivor education benefit forums, was appointed in 2017 to the VA’s Veteran’s Advisory Committee on Education. She is the surviving daughter of Army Sgt. 1st Class Jeffrey Haycock, who died while training to deploy in 2002, and Air Force veteran Nichole Haycock, who died by suicide in 2011.

Ashlynne, one of the first recipients of the Marine Gunnery Sergeant John Fry Scholarship, came to TAPS as a surviving family member in 2002. In 2013, she joined the TAPS staff and was instrumental in creating the TAPS Education Support Services program and online education portal. During her tenure, she and the TAPS team have assisted more than 2,500 surviving children and spouses, helping them access more than $170 million in education benefits.

ABOUT TAPS
The Tragedy Assistance Program for Survivors (TAPS) is the national organization providing compassionate care for the families of America’s fallen military heroes and has offered support to more than 75,000 surviving family members of our fallen military and their caregivers since 1994. TAPS provides peer-based emotional support, grief and trauma resources, grief seminars and retreats for adults, Good Grief Camps for children, case work assistance, connections to community-based care, online and in-person support groups and a 24/7 resource and information helpline for all who have been affected by a death in the Armed Forces. Services are provided free of charge. For more information go to www.taps.org or call the toll-free TAPS resource and information helpline at 1.800.959.TAPS (8277).