Baltimore Orioles Acknowlege TAPS President and Founder for Her ‘Spirited Commitment to Extend a Hand in Charity, Service, Hope and Harmony’

ARLINGTON, Va. – Tragedy Assistance Program for Survivors (TAPS) President and Founder Bonnie Carroll was honored by the Baltimore Orioles on the field during the team’s June 15 game against the Miami Marlins at Camden Yards.

The Birdland Community Hero Program seeks to honor the heroism of members of the extended Orioles community from all walks of life, occupations, and diverse backgrounds living in the region, our country, and abroad, who have distinguished themselves by selflessly working or volunteering in fields that care for, serve, teach, protect, and improve the lives of others around the corner or around the globe who are most in need. 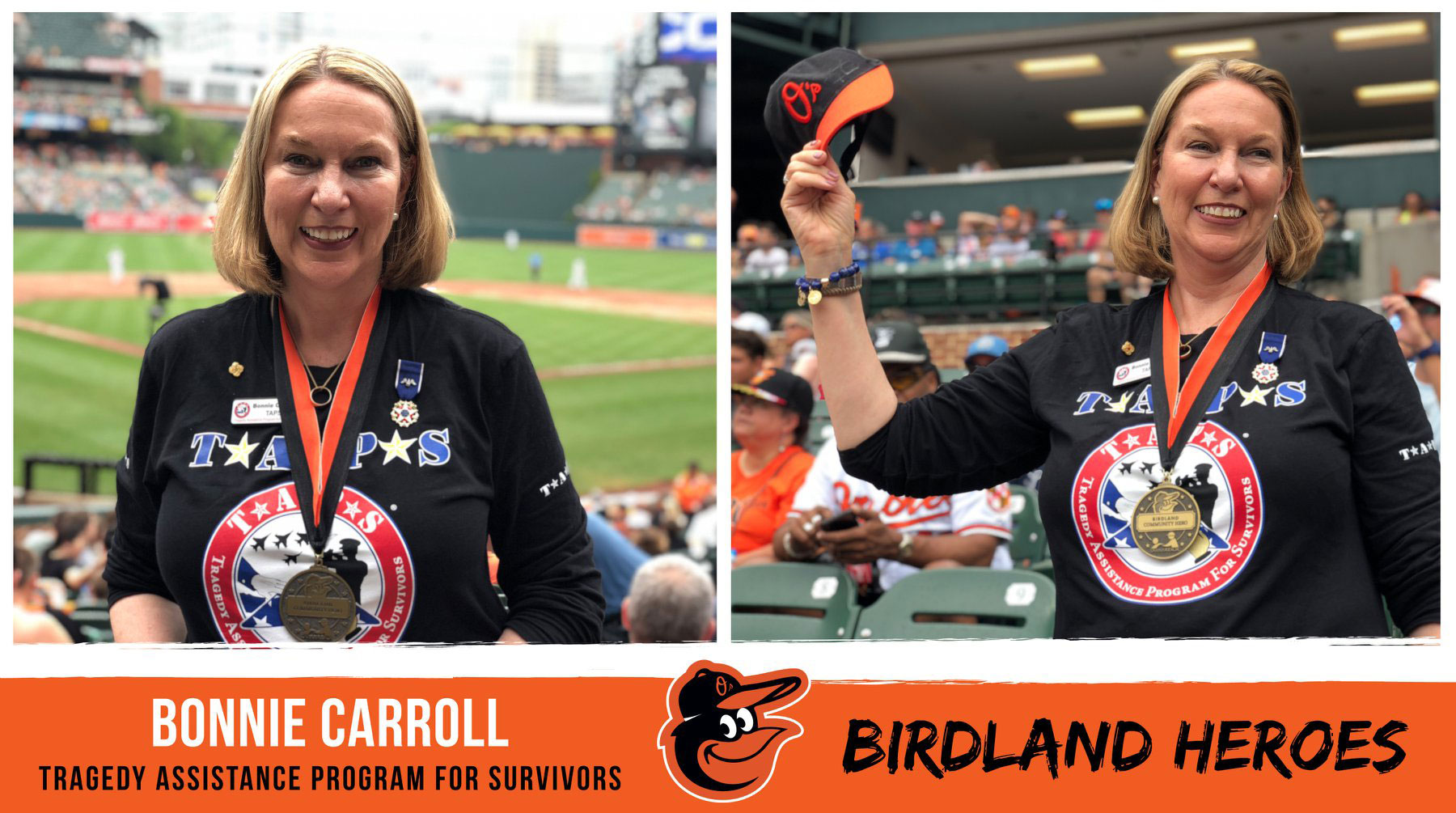 Carroll founded TAPS in 1994, at a time when there was no national support network for the families of America's fallen military heroes. Through the loss of her husband, Brig. Gen. Tom Carroll, who perished in an Army plane crash in 1992 along with seven other soldiers, Bonnie turned her tragedy into a purposeful effort to create what is today the major national organization providing compassionate care for all who are grieving the death of a service member.

Last year, Carroll was named the recipient of the VFW’s 2017 James E. Van Zandt Citizenship Award and was recognized with the Robert M. Yerkes Award by the Society for Military Psychology at the American Psychological Association. She previously received the Presidential Medal of Freedom in November 2015 along with many other professional honors. TAPS has been nationally recognized, including being awarded the Zachary and Elizabeth Fisher Distinguished Civilian Humanitarian Service Award by the U.S. Department of Defense.

ABOUT TAPS
The Tragedy Assistance Program for Survivors (TAPS) is the national organization providing compassionate care for the families of America’s fallen military heroes and has offered support to more than 80,000 surviving family members of our fallen military and their caregivers since 1994. TAPS provides peer-based emotional support, grief and trauma resources, grief seminars and retreats for adults, Good Grief Camps for children, case work assistance, connections to community-based care, online and in-person support groups and a 24/7 resource and information helpline for all who have been affected by a death in the Armed Forces. Services are provided free of charge. For more information go to www.taps.org or call the toll-free TAPS resource and information helpline at 1.800.959.TAPS (8277).

Please email Rita Barry-Corke at rita@taps.org or call (202) 588-8722 (TAPS) with inquiries or to arrange an interview with Bonnie Carroll.