Annual Award Recognizes Outstanding Leadership on Behalf of Military Survivors, to be Presented to Surviving Daughter

ARLINGTON, Va. – The Tragedy Assistance Program for Survivors (TAPS) will present the 2018 Senator Ted Stevens Leadership Award to Ashlyn McCain at the annual TAPS Honor Guard Gala on March 6, 2018, at the National Building Museum in Washington, D.C. The TAPS Senator Ted Stevens Leadership Award is presented annually to a surviving family member who lost a loved one serving in the Armed Forces. The award recognizes an individual who has taken their experience and demonstrated outstanding leadership on behalf of other military survivors.

One of four children, McCain was 15 years old when her father, Army Sgt. 1st Class Johnathan “Bryant” McCain, was killed while serving in Afghanistan. Now 21, the Alaska native has participated in every aspect of the services TAPS offers to those grieving their military loved one. She has travelled internationally with TAPS to represent American survivors to peers overseas; she has become a mentor for young surviving children; she has volunteered with Team TAPS and teams4TAPS; and she has spoken in schools and communities to inspire citizens about service and sacrifice. 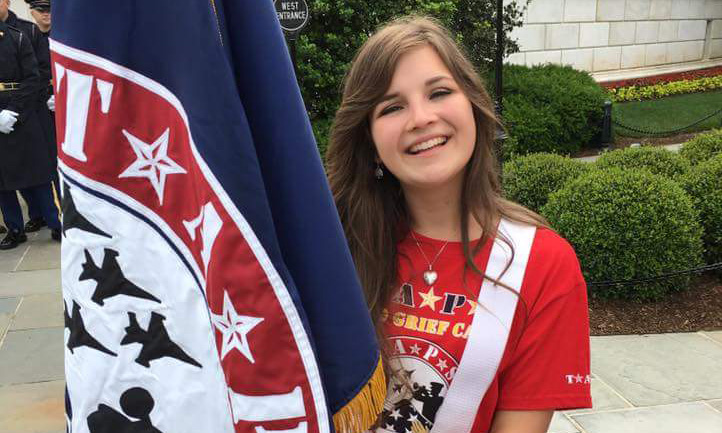 “Ashlyn honors the life her father lived by giving back to others as she navigates her own grief journey,” said Bonnie Carroll, president and founder of TAPS. “She is an outstanding example of a young person who is living the legacy of their fallen hero. Ashlyn has a huge heart, always putting the needs of others before her own. We are very proud to honor her this year with our most prestigious award.”

After moving to Alaska at the age of 4, Ashlyn recalls that her fondest memories were spent hunting, fishing and camping in the state that would become their home for the next 14 years.

In her second year at TAPS, she met a mentor who helped guide her through several rough patches and ultimately inspired her to become a mentor herself.

“The loss of my dad brought me to TAPS, where I created friendships and became part of an even bigger family,” said McCain, who now attends college studying the arts and pursing her dream of becoming an actress. “The values and lessons my mom and dad instilled in me and the support I received from TAPS helped shape me into the person I am today. I know if my dad was here today he would be proud of how far I have come.”

Sen. Stevens left a legacy of caring for the families of our fallen military and was instrumental in the founding of TAPS. Following the Army National Guard plane crash in 1992 that took the life of his friend, Army Brig. Gen. Tom Carroll, Stevens delivered the eulogy at his funeral. Two years later, Sen. Stevens helped Bonnie Carroll found TAPS in Alaska as the national nonprofit organization offering comfort and care to anyone grieving the death of someone who served in the Armed Forces.

The late senator understood firsthand the toll traumatic and sudden loss can have on a family. His first wife, Ann Cherrington, and four others were killed in a 1978 plane crash that Stevens survived. Stevens served as an Army aviator in World War II and was a recipient of the Distinguished Flying Cross.

The evening will begin with a reception at 6 p.m. with the dinner and program to follow at 7 p.m. The National Building Museum is located at 440 G St. NW in Washington, D.C. Sponsorship information is available at www.TAPS.org/Gala. Photos attached for public use.

The Tragedy Assistance Program for Survivors (TAPS) is the national organization providing compassionate care for the families of America’s fallen military heroes and has offered support to more than 75,000 surviving family members of our fallen military and their caregivers since 1994. TAPS provides peer-based emotional support, grief and trauma resources, grief seminars and retreats for adults, Good Grief Camps for children, case work assistance, connections to community-based care, online and in-person support groups and a 24/7 resource and information helpline for all who have been affected by a death in the Armed Forces. Services are provided free of charge. For more information go to www.taps.org or call the toll-free TAPS resource and information helpline at 1.800.959.TAPS (8277).