Army Capt. John Rhoten to be Named TAPS 2018 Mentor of the Year

ARLINGTON, Va. – The Tragedy Assistance Program for Survivors (TAPS) will present its 2018 Mentor of the Year Award to Army Capt. John Rhoten at the annual TAPS Honor Guard Luncheon on March 6 at the Army and Navy Club in Washington. The award recognizes his outstanding volunteer service on behalf of the surviving children of fallen members of the Armed Forces.

Rhoten is a native of Stafford, Va., and enlisted in the Army in 2002. Beginning in the infantry, he now serves as an intelligence officer with the 25th Infantry Division, Schofield Barracks, Hawaii. He has deployed twice to Iraq and twice to Afghanistan. 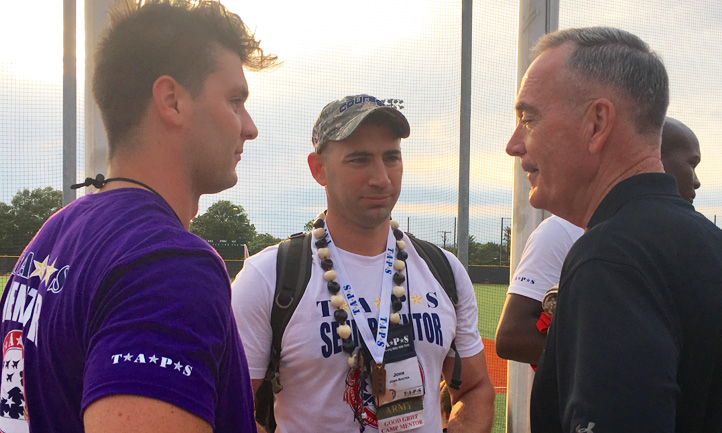 “As a TAPS volunteer and military mentor, John has given selflessly to honor our nation’s fallen heroes by bringing comfort and support to their surviving families,” said Bonnie Carroll, president and founder of TAPS. “Captain Rhoten has been a mentor to countless grieving children at the TAPS Good Grief Camps, he has represented TAPS and honored our heroes in marathons around the world, and he has been a regular volunteer whenever the families of TAPS needed him. As a military mentor and group leader, he has been a role model, giving children a connection back to the military and reminding them that they are not alone, but are now part of a national legacy of service and sacrifice.”

Rhoten first served as a TAPS mentor in 2011 out of his desire to honor his fallen comrades and connect with the families grieving their loss. What he was unprepared for, however, was that his volunteer work with TAPS would also help him to cope with his own grief. Rhoten now serves as a group leader at TAPS camps, serving as a role model for other military mentors.

“Spending time with my mentee and watching him grow into a young adult has been such a rewarding experience for me,” said Rhoten, who was paired with Mark Capra at a TAPS Good Grief Camp and remained his mentor from 2012 to 2014. Capra’s father, Air Force Technical Sgt. Anthony Capra, died in April 2008 in Iraq. “Children need to know that it is OK to have the feelings that they have, to reinforce that their loved one’s service mattered and that they will never be forgotten. We owe that to our fellow service members.” Today, Capra is a college student who is paying it forward by also serving as a mentor to other children who have lost a loved one in the military.

The evening will begin with a reception at 6 p.m. with the dinner and program to follow at 7 p.m. The National Building Museum is located at 440 G St. NW in Washington, D.C. Sponsorship information is available at www.TAPS.org/Gala. Photos attached for public use.

ABOUT TAPS
The Tragedy Assistance Program for Survivors (TAPS) is the national organization providing compassionate care for the families of America’s fallen military heroes and has offered support to more than 75,000 surviving family members of our fallen military and their caregivers since 1994. TAPS provides peer-based emotional support, grief and trauma resources, grief seminars and retreats for adults, Good Grief Camps for children, case work assistance, connections to community-based care, online and in-person support groups and a 24/7 resource and information helpline for all who have been affected by a death in the Armed Forces. Services are provided free of charge. For more information go to www.taps.org or call the toll-free TAPS resource and information helpline at 1.800.959.TAPS (8277).