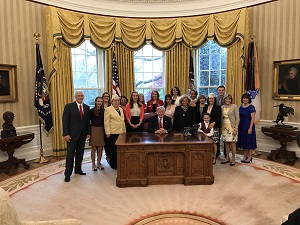 "We appreciate that the President, Vice President and Mrs. Pence took time to recognize the sacrifices made by America's Gold Star wives and honor our fallen heroes," said Carroll, surviving spouse of Brigadier General Tom Carroll and 2015 Presidential Medal of Freedom recipient.

TAPS provides support to all those grieving the loss of a loved one in service to our nation, including Gold Star wives, siblings, parents, battle buddies, fiancés, extended family members and friends; its services are available to all those who lost a loved one whose life included military service, regardless of their relationship to the deceased or their circumstances or location of death. If you are grieving the loss of a fallen service member and would like to talk to someone, the TAPS 24/7 National Military Survivor Helpline is always available with loving support and resources at 800.959.TAPS (8277). More information can be found on TAPS at www.taps.org or by emailing info@taps.org.

ABOUT TAPS
The Tragedy Assistance Program for Survivors (TAPS) is the national organization providing compassionate care for the families of America's fallen military heroes and has offered support to more than 70,000 surviving family members of our fallen military and their caregivers since 1994. TAPS provides peer-based emotional support, grief and trauma resources, grief seminars and retreats for adults, Good Grief Camps for children, case work assistance, connections to community-based care, online and in-person support groups and a 24/7 resource and information helpline for all who have been affected by a death in the Armed Forces. Services are provided free of charge. For more information go to www.taps.org or call the toll-free TAPS resource and information helpline at 1.800.959.TAPS (8277).