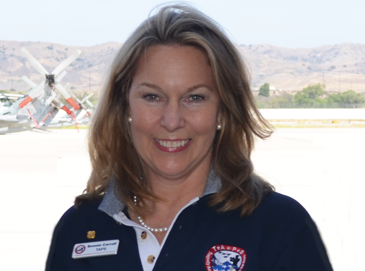 Bonnie Carroll is a 2015 recipient of the Presidential Medal of Freedom. She is a military veteran, the surviving spouse of the Brigadier General Tom Carroll, a former staffer in the Reagan and Bush White Houses, and the President and Founder of the Tragedy Assistance Program for Survivors (TAPS), the leading national Military Service Organization providing compassionate care, casework assistance, and 24/7/365 emotional support for all those impacted by the death of a military loved one. Ms. Carroll founded TAPS following the death of her husband in an Army C-12 plane crash on Nov. 12, 1992.

Ms. Carroll served in Baghdad, Iraq, as the Deputy Senior Advisor for Programs in the Ministry of Communications. In that capacity, she managed the execution of a quarter-billion dollars in U.S. supplemental funds for the reconstruction of the telecommunications capability in Iraq, the modernization of the postal service, and creation of the Iraq Communications and Media Commission. She continues to work with Iraqi surviving families facing traumatic loss.

Before going to Iraq, Ms. Carroll was appointed to be the White House Liaison for the Department of Veterans Affairs (VA) in Washington, D.C. Prior to this appointment, she served as director of the Tragedy Assistance Program for Survivors (TAPS) and ensured the development of programs to aid families coping with a traumatic loss in the military.

Carroll retired as a Major in the Air Force Reserve following 30 years of service, where her career included service as Chief, Casualty Operations, HQ USAF. Her last assignment was on the HQ USAF National Security and Emergency Preparedness staff in the Pentagon. Prior to joining the USAFR, Major Carroll served 16 years in the Air National Guard as a Transportation Officer, Logistics Officer, and Executive Officer.

Ms. Carroll has served on the Board of Directors of the Association of Death Education and Counseling, the Department of Defense Military Family Readiness Council, the VA Advisory Committee on Disability Compensation, and is past co-chair of the Department of Defense Task Force on the Prevention of Suicide by Members of the Armed Forces. She currently serves on the Defense Health Board and the Board of the Iraq and Afghanistan Veterans of America.

She is the author of "Healing Your Grieving Heart After A Military Death" and has authored numerous articles on grief and trauma. She has appeared on CNN, FOX, NBC's The Today Show, and other national programs speaking about military loss. In addition to receiving the 2015 Presidential Medal of Freedom, Ms. Carroll was featured in People Magazine as a "Hero Among Us" and received recognition as "Washingtonian of the Year." She has also received the National Citizen Award from the Military Chaplains Association and the Faithfully Serving America Award from the American Legion. She was named a recipient of the Community Heroes Award by the Military Officers Association of America, and been recognized by the Defense Department with the Office of the Secretary of Defense Medal for Exceptional Public Service, and has received the Army's Outstanding Civilian Service Medal and the Navy's Distinguished Public Service Award. Most recently, Bonnie accepted the Veterans of Foreign Wars 2017 James E. Van Zandt Citizenship Award and the American Psychological Association's 2017 Robert M. Yerkes Award, the highest honor bestowed by its Society for Military Psychology.

During her earlier career in Washington, D.C., Ms. Carroll lived and worked on Capitol Hill as a political consultant on Presidential and Congressional campaigns and consultant on aerospace and national defense issues. In the federal government, she held Presidential Appointments in the Reagan and Bush Administrations, including a senior level position within the West Wing of the White House as Executive Assistant for Cabinet Affairs. In this capacity, she served as liaison for President Reagan with his Cabinet, coordinating domestic and economic policy implementation. In the administration of George Herbert Walker Bush, Ms. Carroll served in the White House Counsel's Office, assisting with the legal review process for Presidential nominees to the Cabinet and other senior government positions requiring Senate Confirmation.

Ms. Carroll divides time between her home in Anchorage, Alaska, and the TAPS National Headquarters in Arlington, Virginia.