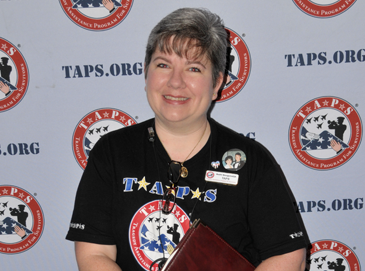 Audri Beugelsdijk came to TAPS as a Navy widow in 1997 after her husband Seaman Jason Springer was lost at sea. A Navy veteran herself, Audri holds bachelor’s and master’s degrees in psychology. She also has advanced training in death, dying and bereavement through the Center for Loss & Life Transition and the Association for Death Education and Counseling (ADEC). Since 1997, she has supported military families across a variety of programs, mentoring both adults and teens. She currently serves as the TAPS Survivor Care Team Director, overseeing a dedicated team of survivor professionals in providing peer support and conducting outreach nationally and internationally to bereaved military families. Using growth through adversity as her personal mantra, Audri strives to support survivors as a facilitator at TAPS Regional Seminars where she focuses on grief support, self-care, empowerment and meaning making after loss.