Sitting down to watch Dr. Bob Baugher's two-DVD set about men's grief, I was apprehensive. Like many men, I suppose I didn't want to talk about or even watch other men discuss their grief. The first video of the two-part set introduced each of the eight fathers, husbands, and brothers at a point in time when they were two to ten years out from the death. When I realized none of them had lost a loved one in the military, I was skeptical, concerned that it would be just another psychologist telling me how I was feeling when they can't really know. 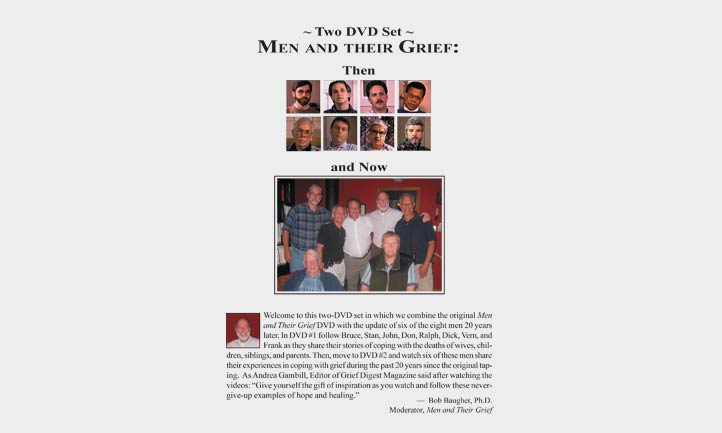 But after the men in the group started talking, I found there was a direct correlation between each of their stories and how I felt. The topics of discussion ranged from society's response toward grieving men to anger, avoidance, denial, triggers, sexuality, crying, and crises. As they shared, I saw much of my grief journey mirrored in theirs. I am glad I watched, as it really validated my feelings.

Men and Their Grief taught me some coping skills, like saying to myself what I want to do before I leave a room. This simple technique can help fight off those moments of feeling crazy when you walk into a room and can't remember why you're there. It was really nice to get some reassurance that I'm not crazy. Many started projects they never finished and would recommend not to start anything you can't keep your train of thought long enough to complete. Others struggled with many of the same problems I have had to face in grief. Too often, we men feel as if we're never going to get out of the fog, never going to feel good again. It was really nice to hear that those feelings are normal.

The second DVD was similar. Twenty years after the first video, six of the men returned to share how they had grown in their grief journey. I was surprised that the men still had times of experiencing difficult feelings and continuing to grieve. They felt their losses were still significant many years later. It offered a harsh reality check that I'll miss my son for the rest of my life, but it also offered hope. Many of the men had grown. A widower had found the confidence to date again and had even remarried.

Both DVDs detail how men grieve. Men try to put others first. Many try to fill their time with projects or work to try to stay busy. One man talked about going back to work too soon. His boss came to him just six weeks after his loss and told him he wasn't being productive. After Sam's death, I realized I went back to work too quickly, too, and ended up having to take more time off. In those early days of grief, I was trying to use my job as a way to preoccupy my time and stifle my grief. I was afraid of feelings like sadness, anger, and confusion and didn't want to deal with them head on. Like many of the men in the video, I have found that you can run but you can't hide from grief.

By the end of the two DVDs, I felt like I could easily have been one of those men, sitting together and sharing. Similarly, when my wife and I have attended TAPS retreats with other parents, there is a wide range of ages and circumstances around each loved one's death. Throughout the video many of my TAPS family members came to mind. Although there are differences between us, all of our grief journeys matter and we can share them together.