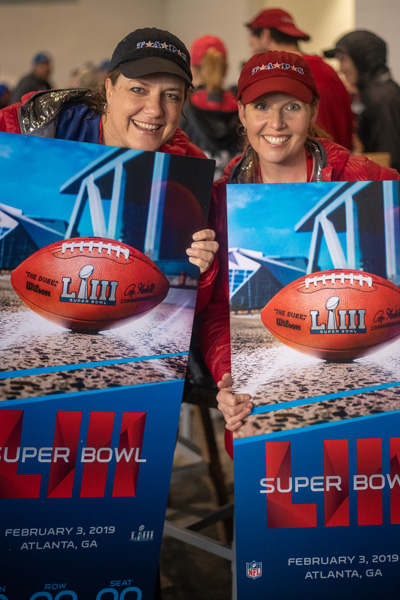 Two of the families earned their tickets to the big game at last week’s NFL Pro Bowl in Orlando, Florida. Michelle and Jake Taylor, from Tampa, and Amy and Emma Dozier, from Cary, North Carolina, were invited onto the field at the Pro Bowl halftime for a surprise competition. The two families went head-to-head answering football trivia questions, completing an obstacle course and attempting field goals.

Although the Taylors won the competition, the crowd erupted in cheers after learning both families would receive Super Bowl tickets.

As it turns out, the Taylor and Dozier families were joined at the big game by a third TAPS family from Alabama. Earlier this week, Atlanta Falcons Head Coach Dan Quinn announced that with the support of NFL Salute to Service partner, USAA, he would send Robert and Nathaniel Boland to the Super Bowl.

Robert is the surviving father of Zachary Boland, who died of illness at age 18 during Marine basic training. Zachary’s brother, Nathaniel, has carried his brother’s legacy forward and is currently serving in the Marines.