“It’s an amazing technology. I feel like you’re standing right there in front of me.” – Barack Obama

They bring communities together in immersive spaces to talk, dance, play, and collaborate as if in the same room.

They imagine a world where people intentionally engage with people unlike themselves as a source of creativity, positivity and strength.

January 2020: TAPS is excited to introduce the Shared Studios portal at TAPS Headquarters, the first global portal in the Washington Metropolitan Area.

The TAPS Shared Studio is a place where high technology cameras and connections will create a global community. We will be able to virtually connect with people formerly separated by distance and difference, culture and tradition. Our Shared Studio will create an intimate virtual community to enhance collective engagement, creating a global connection for learning and knowledge sharing, bringing the global community closer by removing barriers to communication.

When a loved one dies in the military in a far off land, serving with military members from a different culture, for a mission that may be difficult to understand, it can leave us with so many questions. To create a place of peace within ourselves, we must find meaning and purpose. Imagine sitting down to a meal with widows in Iraq or Afghanistan or Syria or any number of countries around the world. To have an honest conversation about life and loss, heartache and hope. We invite you to join us for just such an opportunity.

Shared Studio is an amazing technology that creates an aura of intimacy between portals where you will feel as though you are sharing a meal, having a conversation, participating in an activity or any number of interactions thanks to high-definition, life-size audiovisual connection. This amazing technology allows you to get in touch with the world, to share your culture, your story, and forge real connections with others.

The TAPS portal welcomes our surviving military families as well as institutions in the Washington, D.C. area and beyond to take part in this barrier-breaking platform, to further an interpersonal and communal connection with the global community  –  from shared meals on a large dining table with Nigerians, to the shared experiences of the survivors and families of those who have lost their loved ones in the military in Iraq, to refugee camps in Syria and Uganda – we all connect with one another to foster our common bond in the global community by sharing love, hope and healing. 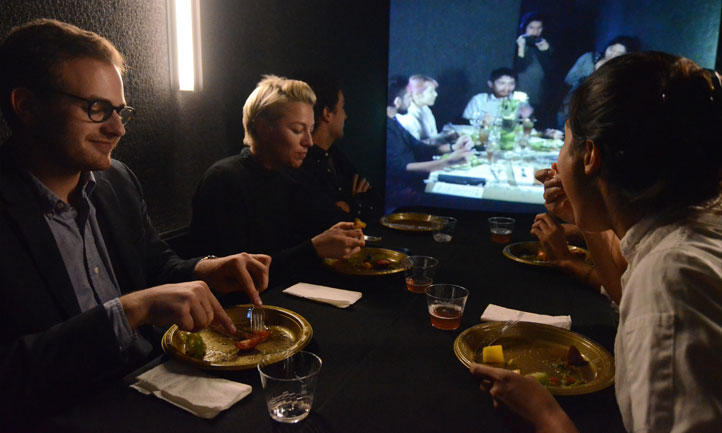 Shared_Meals in Portals in NYC and Rwanda

Shared_Studios Portals: Walk through the Internet