“This is a very sacred site. It is a shrine for the prophet Yunus,” one of the guides told the group.

“What was his name again?” I asked, wanting to imprint the new name to my mind.

“Yunus. He is very important in our faith. This place is called Nabi Yunus.” 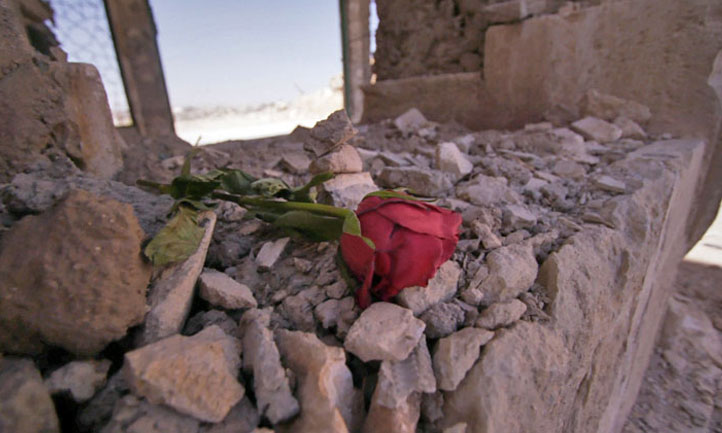 I looked down at the elegant archways standing amidst tangled rebar and rubble – so much rubble. “Yunus,” I repeated under my breath. I didn’t know who this holy man was, but my heart hurt looking at what had been done to this sacred site.

I never expected to travel to Iraq. Growing up, I learned about the Holy Lands. Names like Nineveh, Assyria and Babylon were all part of the fabric of my Biblical teaching. And I vaguely knew that these ancient cities were part of modern day countries, but it all seemed so far away. How could I know that one day this land would define some of the most profound experiences of my life? How could I know that the man I loved, Army Ranger Cpl. Jason Kessler, would take his last breaths in ancient Nineveh? And 10 years later I would stand on its historic foundation?

I went to Mosul with TAPS as part of a larger delegation with the International Welfare Foundation and the Mosul Reconstruction and Development Group. Hoping to provide support to refugees who had been displaced by the horrific destruction of ISIS, I personally wanted to tell the stories back home of those affected in the world where Jason died.

Coming to Mosul, I knew a few things. Along with supporting refugee families and witnessing the devastation first hand, I knew I wanted to make a private memorial somewhere for Jason. And I knew I wanted to take home earth from this place. At the time, I didn’t think too deeply about why I wanted those things. It simply welled up in me as a need. Looking back now, I realize that it was a declarative act. To say, “You were here. I am here. I remember. Your life matters.” To leave something and take something from that place was another connection to the life we had lived together. Taking pieces and making them into something else was an act demonstrating that the story doesn’t end with brokenness. It continues with rebuilding connections.

When I stepped out onto the sacred site of Nabi Yunus, it was clear that was where I would be able to memorialize him. I thought Jason would like that I was doing it there. Along with being an adventurer and warrior, he was a scholar, theologian and philosopher. He loved reading, and he loved history. I wondered if he ever saw this place when he was stationed here. It would have been beautiful then.

As I wandered through the ruins, I picked up a few pieces of stone and fragments of the building. I stopped at a remaining doorframe and sat within an archway. I began to stack the rocks into a cairn - a symbol that something important had occurred here. I had built cairns before, most memorably in the red rocks of Sedona with a group of surviving women on a TAPS Empowerment Retreat. I knew what a powerful symbol they could be. I took a red rose with me that morning to place on the memorial and laid it next to the cairn. From these fragments, I had built something new. It was small, but meaningful. And I scooped up a portion of earth to put in my container to take home.

I looked at what I’d built and I smiled as I realized it reminded me of something else. A few years after Jason was killed, I made a clay sculpture out of broken glass. I formed a broken woman reaching high to the sky. I shattered a glass bottle and put its fragmented pieces into a plaster mold. The high intensity of the kiln’s heat melted the pieces down to create something new. Nothing was lost; it was repurposed. The lines of the broken pieces were still evident, but they became pieces of a new whole.

In the days that followed, we visited various refugee camps and sites destroyed by ISIS militants, where we met men, women and children impacted by the devastation. The image of Nabi Yunus kept coming back to me. In it was a profound symbolism for the mission of rebuilding not only in Mosul, but the rebuilding of a life after the destruction of grief. Yes, something sacred was attacked and destroyed. A profound tragedy occurred, that is true. However, the story doesn’t end there.

I later learned that Nabi Yunus has a complicated history dating back thousands of years. Yunus is another name for the prophet Jonah and this shrine was his burial place. Until 2014, it had become a central place of worship for local Muslims and place of pilgrimage for Jews and Christians throughout the world, until later that year when the revered holy site was reduced to rubble by ISIS. But, amongst the destruction and intended division by ISIS, I realized that these three seemingly very different faiths were united for a common cause: rebuilding Mosul.

In my own life and in the lives of the families that I have met through TAPS, I see a similar thing. I see new beauty rebuilt out of ruins. I see despair turn into laughter. I see connection through new friendships. I see the ways family members continue the living legacy of their loved one. Death and destruction are not the end of the story. They are only part of the story.

We honor the lives our loved ones by the choices we make. Bringing awareness and support for rebuilding Mosul is one of the ways I can continue Jason’s legacy of service. What has happened to Mosul is woven into the fabric of all our stories. Day after day, we hear of terrorist attacks throughout the world and even within our borders. But it’s not the only story. Just as many people are coming together to rebuild Nabi Yunus, so too can we as surviving military loved ones here and overseas, come together to help rebuild hearts and lives.