Purchase a piece from the Afghan Hope Collection and support the families of the fallen. 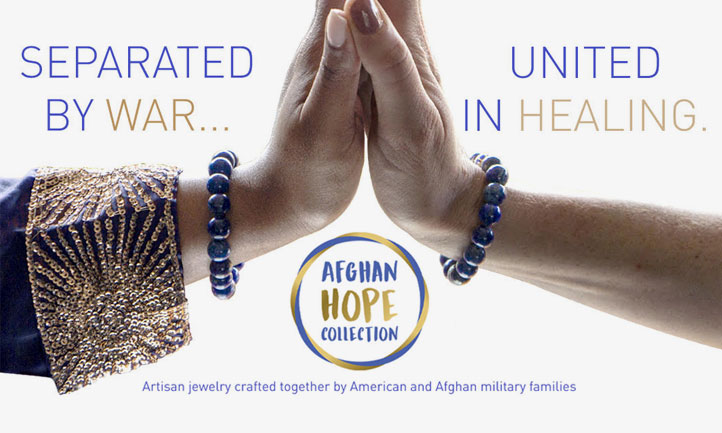 Green Beans Coffee is a decades-long supporter of America’s service members with over 30 locations on military bases in the Middle East, North Africa and Southeast Asia. They were the first U.S. food and beverage company to serve troops in Afghanistan after 9/11.

Since 1994, TAPS has provided comfort and hope for more than 90,000 surviving families across America. Meanwhile, on the other side of the world after four decades of conflict and terrorism, Afghanistan continues to suffer record-breaking casualties. In Afghan society, the loss of a husband—usually the only source of income for the family—means a total loss of security and stability.

In 2016, TAPS launched the Afghan Hope Program with widows in Kabul, Afghanistan. They named the program “Karguzaar,” which means “creating jobs.” It helped to bring employment and stability to the widows of the Afghan National Security and Defense Forces by working with American war widows—7,000 miles away—to produce the Lapis Lazili Hope bracelets.

Jon Araghi, co-founder of Green Beans Coffee said, “We’re proud to partner with TAPS and support the great work they do for America’s families. Supporting all those defending our country’s freedoms has been part of our DNA as a company since the very beginning, in 1997, and it always will be.”

The Lapis Lazili Hope bracelets are made by hand in Kabul, with Lapis Lazili gemstones mined in Badakhshan, Afghanistan and are then shipped to the United States. There they are wrapped with love by the families of our American fallen heroes.

The Afghan Hope Collection is available at http://bit.ly/afghanhopecollection.