Last month I boarded a 14 hour flight to Dubai, UAE.   It was a stopover for my end destination, Hyderabad, India.  I am a geeky traveler and love to look up potential flight patterns so I know when to look out the window. On a flight to Moscow one time I remember experiencing the most beautiful landscape as we flew over the southern tip of Greenland midday.  Since then my international travels have me doing flight research. For some reason on this trip I did not research this and assumed we'd be flying over Africa or Europe.   But my mental geography was screwed up as I thought India came before the Middle East.  Towards the end of the flight when I was going a little stir crazy and couldn't find a good movie to watch I switched the screen in front of me to the map view to see where we were. My heart jumped a little as I saw the names Mosul and Basra on the map.  Surely not, commercial airlines don't flight over countries like Iraq; at least that's what I thought.  I nudged my friend to open the window and sure enough we were above desert. I took a picture and thought for just a moment. 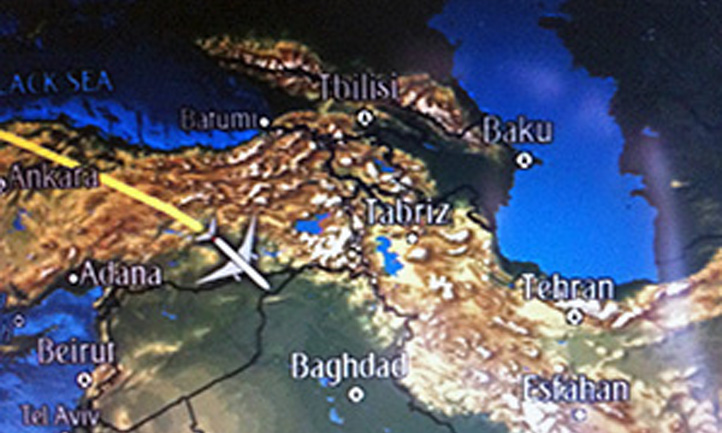 A bucket list item that probably only a TAPS audience will appreciate was to visit "the spot" where my brother died.  It's been 9 years and Iraq is still no place to take a leisure trip, not to mention I would create undue stress on my parents. Mentally I had accepted the fact that I would never see that country. I would still like to visit the actual spot, but if that day doesn’t come, my brief flight over Iraq brought me closer than I thought I would ever get.

In my last blog I mentioned it was time for me to start pursuing my own destiny, which was actually the purpose of the trip that had me flying over Iraq. Never could I have planned to fly over "the spot." It's probably the closest I'll ever get to Baghdad without giving my dad a heart attack. So as I flew over I took in the moment for what it was and thought this is the last place my brother drew breath.  His blood was spilt on this ground for the freedom of a nation and my own security.  The freedom they experience isn't as great as what you and I experience, but they are still free because of soldiers like Jonathan.  Pursuing my own destiny and calling brought me a little surprise I wouldn’t have had otherwise.