Since 2001, DynCorp International has lost 84 teammates while supporting our nation’s foreign policy objectives. The sacrifice of these contractors is not widely known nor heralded except by their families and friends. Our nation asked their loved ones to go to war serving beside our military. Their families deserve our respect and embrace. 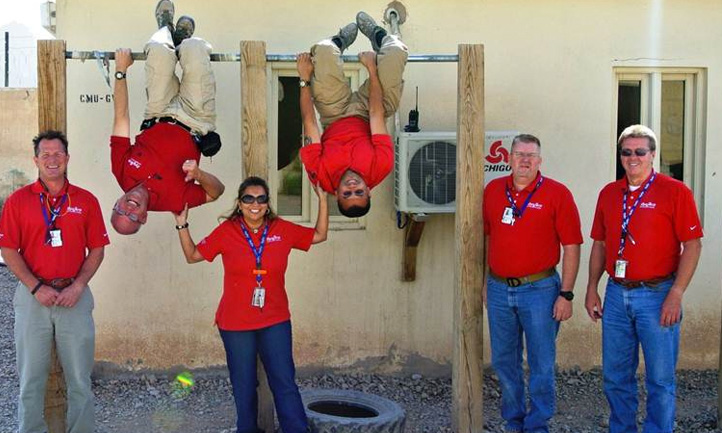 In recognition of this reality, DynCorp and TAPS signed a Memorandum of Agreement (MOA) in 2014 to provide support to the families of their fallen personnel. TAPS has similar MOAs with all but one branch of the U.S. military, but this partnership is the first such arrangement TAPS established with a private company. The agreement formalized the long-standing and enduring relationship between the families and leadership of DynCorp and TAPS.

TAPS works hand-in-hand with DynCorp's Employee Assistance Program to provide surviving family members of their fallen employees comfort and care. We welcome them into a family who understands their losses while also connecting them to the comprehensive services and programs that TAPS has been providing to other survivors for 22 years.

"Every morning when I walk into work, I look at the names of those we have lost on our memorial wall and am reminded of our commitment to the well-being of our employees and their families" said Lou Von Thaer, DynCorp chief executive officer. "Our partnership with TAPS helps us honor that commitment when it matters most, we are incredibly appreciative of the partnership."

DynCorp also participates as a major sponsor to the TAPS Honor Guard Gala each year. Executives from their company serve on the Gala committee and encourage their business colleagues to join them in supporting TAPS. Beyond the Gala, DynCorp and its employees have participated in a variety of fundraising activities to benefit TAPS.

Since 2010, DynCorp has supported TAPS through its "Red Shirt Friday" program; employees wear red shirts each Friday to show support of our servicemen and women. As part of the "Red Shirt Friday" initiative, DynCorp sells red polos and t-shirts embroidered with the words: "Support the troops - Red Shirt Fridays," in its company store. For each shirt sold, DynCorp donates $10 to TAPS, selling roughly 6,500 shirts and raising nearly $65,000 for TAPS.

The DI Stars formed a Team TAPS race group in memory of their fallen colleagues, wearing shirts with photos of each DynCorp team member who lost their life while serving in the last five years.

"I have seen the great work the people of DynCorp do in support of our military in very challenging and dangerous environments. When a Blackhawk goes down, it does not distinguish between soldier and contractor" said Bonnie Carroll, TAPS president and founder. "We are honored to have a partnership with DynCorp that allows TAPS to provide bereavement care and support to the families of their employees who die while serving and supporting our nation's security."